What I Ate Wednesday #278: Tech-Dependent

Happy What I Ate Wednesday. How’s your week going? I feel like I’m still recovering from last week’s catch-up-a-thon. Five days out of town was a longer break than I’d taken in a while, and even though it was well worth it, diving back into a busier than usual week was, well, predictably insane. So many photos and things to upload and things to write about!

To make things even nuttier, last week was not a good week for tech. I felt like every damn outlet and device I use was acting up. All week, for example, since the weekend, I’d been having trouble with my phone. I couldn’t hear what someone on the other end of the line was saying when I held the phone up to my ear, but of course headphones and speakerphone were fine. Naturally, there weren’t any appointments available at any local Apple stores until Thursday, so it made for an interesting few days. It’s crazy how dependent we are on our devices! Knowing it wasn’t working right made me want to be on my phone even more. Don’t even get me started on the FitBit rabbit whole I went down Saturday night.

I’ve been getting a lot of use out of my white noise app. Can I just stop for a sec to say how much I love that one of the options is a dishwasher rinsing? So soothing… 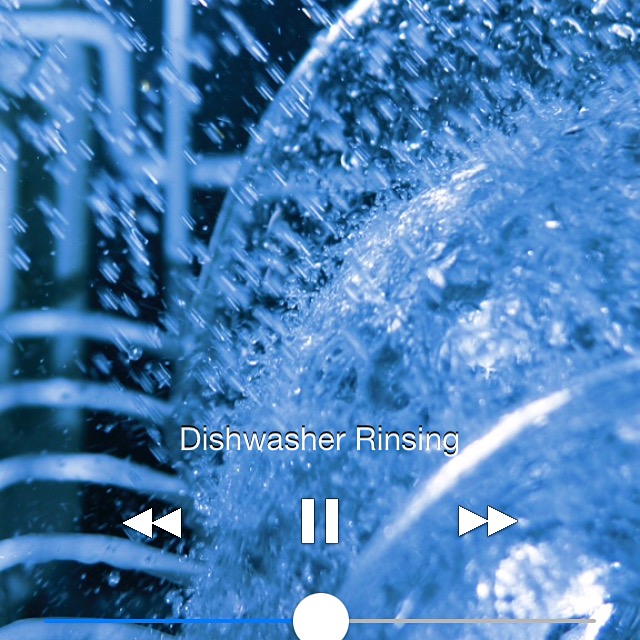 I channeled some of my frustration and anxiety into recipe projects, so at least I have some fun stuff to share with you guys this month. This post has a few glimpses. Here’s what I ate last Thursday.

Breakfast: Savory Oats  with avocado— pardon the recycled photo. I have no idea why I was craving this so much last week because it was so hot out. It totally hit the spot, though. Speaking of savory oats, Ddd you see my Fitness article about savory oats?) 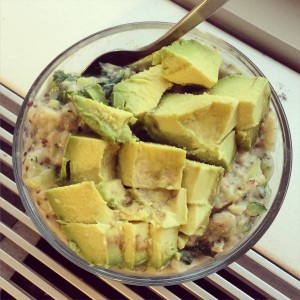 Lunch: A desk lunch salad comprised of a bunch of vegetables I’d prepped earlier in the week, chickpeas, goat cheese, and an egg on top. I added some vinegar for dressing. A little later, I had some sliced mango leftover from recipe-testing. 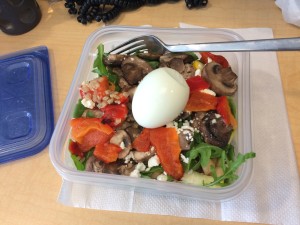 Snack: Some plain yogurt and the remaining few bites of a peach dessert recipe I was testing. 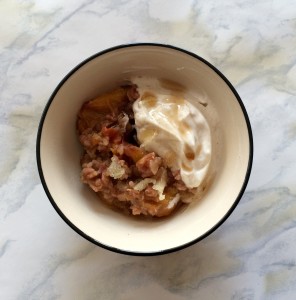 Dinner: I’d made a giant batch of salsa for a project earlier in the week, so for dinner, I made a big salad with baby kale, avocado, sliced tempeh, and salsa. It was fantastic. I knew I had a potentially long night ahead of me at the Apple store, and the last thing I wanted to do was worry about dealign with a frustrating and emotional situation on an empty stomach. 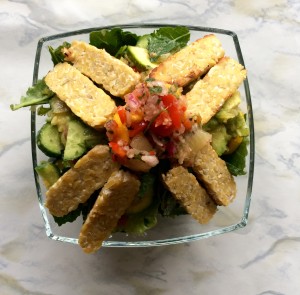 Snack: A chopped peach with a few spoonfulls yogurt mixed with PB2. I was hungry after spending a few hours in Grand Central, and it was almost 11:00 by the time I got in bed (late for me), so no surprise I forgot to take a picture!

Are you super-attached to your tech?