Earlier this week,  World Health Organization (WHO) research group International Agency for Research on Cancer (IARC) released a statement in which it declared that processed meat causes cancer, and that red meat may cause cancer.

Since today is “Thinking Out Loud” day over here, it seems like a good time to share a few thoughts on the news.

So, in this Yahoo Health article, I echo many of my fellow RDs when I say not to panic. For many of us, this is hardly news—the shocking thing is that it took so long for an official statement to be released on the matter. There’s a large body of research showing that processed meat (such as hot dogs, ham, bacon, sausages, corned beef, and many lunch meats), in particular, is associated with increased cancer risk.

Of course, it’s a huge deal that IARC has classified processed meat as a Class 1 Carcinogen to humans, which puts it in the same category as smoking tobacco and exposure to asbestos. 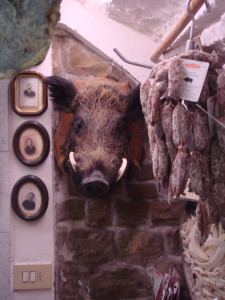 I think one of the main things to consider is that it was a specific type of cancer—colorectal cancers—implicated in the research. That said, this particular type is one of the top killers, so calling out diet as a modifiable risk factor could potentially save a lot of lives. People may not respond to “eat these things in moderation,” but “this s*** causes cancer” is pretty clear.

However, there are so many types of cancer—and so many ways to die, period—that I think it’s important to pick your battles.

Another thing to keep in mind: dose is a factor. Higher intake –> higher risk. Though a slice of bacon once in a blue moon likely won’t kill you (unless, of course, you choke on it or are deathly allergic to pork), consuming bacon on a regular basis over a long period of time could contribute to disease.

If you’re panicking because these foods are a part of your everyday diet, take a deep breath. Why not use it as an opportunity to try some healthier, new foods you might not have thought of otherwise?

Anyway, these are just a few thoughts.

What do you think about the announcement?