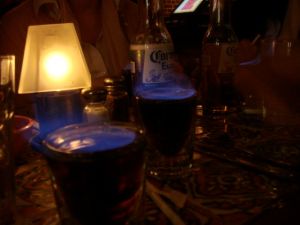 A recent post on Tara Parker-Pope’s New York Times blog, Well, featured an essay by Dartmouth sophomore Owen Jennings. Because of a liver disease, Jennings does not drink alcohol, which is somewhat ironic, given that he lives in the frat house that the movie Animal House was based upon.

I found his piece very insightful, especially in that he refers to alcohol as “the only drug that everyone is expected to use,” a drug which can have very damaging effects in large doses. Yet it is assumed that all college students drink, basically because they can (in most cases).
From Jennings’ sober position, the drinking habits of his friends seem “mindless.”  He suggests, “The question shouldn’t be, ‘Why aren’t you drunk?’ Rather, we need to start asking, ‘Why are you drunk?'”
While I appreciate articles about how to drink responsibly and fit alcohol into a healthy diet (here’s a cute post from a Self intern), it is also important to keep the notion of balance in mind. There’s a line that gets crossed from one’s drinking being, like, too many extra calories to a serious problem.
And it’s not just college kids—when I was in college, most of my friends were a bit older (mid-twenties to early-thirties). What my college friends would call a night was like milk to these guys. Whatever happened to slowly savoring a drink?
While I like a good glass of wine or the occasional cocktail, the few times I’ve attempted to keep up with the group did not end well…Being four-foot-eleven definitely limits your options in that respect. What the “experts” tell you about sipping water in between drinks and not drinking on an empty stomach is true.
Just last night, I watched the HBO Addiction project, which provided another perspective on drug and alcohol use. In addition to introducing the viewer to individuals with engrossing, often heartbreaking stories, it explores some of the new ways in which addiction is being treated. Definitely worth watching.