So, it’s Tuesday already. I thought I’d just share a few random thoughts today–you know, throw some pasta at the wall to see if it’s done. Or whatever reason you throw pasta at the wall for. Damned if I remember. It’s been a while and I’m still in the contemplation stage regarding finding a new pasta shape.

1.) I love bringing salads for lunch on the days I work at the hospital, usually in a glass pyrex container. One thing I’ve been wanting to do but have as yet to try is salad in a jar—mostly because I lack a jar large enough to contain the monster of a salad I typically eat. After seeing this awesome step-by-step post on the Kitchn, I feel compelled to go get a big-ass jar at Bed, Bath & Beyond to make this happen. After my Lenten shopping fast is over, of course.

2.) Speaking of the hospital, my new lab coats came in. It’s kind of weird (but not in a bad way) to have my name and credentials embroidered above the breast pocket—the first thing I thought of was  “Bowling shirt for nerds!”

3.) Those Trader Joe’s brie mini’s? Too f***ing cute—and pretty tasty. For the record, this was a “small” snack plate (aka normal-size for, like, 1957), and I love how it looks like so much more than it actually was. It kind of makes me want to get rid of the large plates. I hardly use them anyway, since part of living alone for me apparently entails eating most of my meals out of bowls. 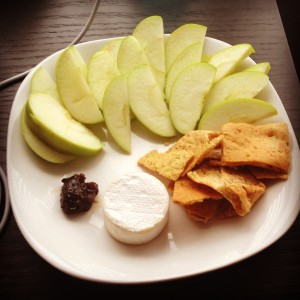 4.) I know I talk a lot about the negative impact of dwelling on thoughts about what “should” or “shouldn’t” do, but I have to admit that I love this line from this Bob Dylan song:

“Everything passes, everything changes, just do what you think you should do.”

5.) Speaking of heart, the other day, a patient held onto my hand for a long time and said, “Cold hands, warm heart.” Then they added, “Lucky boyfriend.” I all but burst out laughing.

Little did they know, this is apparently my theme song. Second only to my other theme song maybe. Does the fact that my two theme songs were written before 1970 by Joni Mitchell and Neil Young mean I’m an old Canadian soul? It probably just means something obvious and deep, like, human emotions are timeless. Anyway.

What’s on your mind this Tuesday? Have you tried to salad-in-a-jar thing?