Happy Friday. Any plans for the weekend? I’m looking forward to catching up with friends, testing a few recipes, and enjoying the nice weather. Because it’s been nice enough to have the windows open, I’ve found myself playing this live, acoustic Jackson Browne album on repeat. And Volume One of the same set. So embarrassing…It’s just so good. It’s also a trip to hear, like, jokes and snide commentary about George W.  Remember when…?

Speaking of recipes/cooking, I appreciate that my iPhone text predictor/autocorrect recognizes “crustaceans” as something I say on the regular. I bought some langostino tails at Trader Joe’s the other day and now I want to put them in all the things. Apparently, “langostino” is Spanish for “little lobster.” It’s very similar to lobster in taste and texture but more like shrimp in terms of size. With only 70 calories, 1 gram of fat (0 g saturated), and 75 mg cholesterol per serving, it’s a great source of lean protein and delicious in a wide range of dishes. Man, you’d think the company was, like, paying me to talk about how much I love these things, but I swear I’m just newly re-obssessed with them. 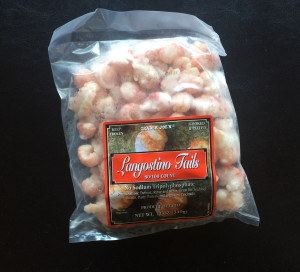 I’ve definitely talked about langostino on the blog before, but it’s been a while. They’re sold frozen, but are easy to thaw in the microwave or even in warm water. Here are a few of my favorite ways to use them:

Got a case of spring fever and cooking for someone special? For anyone not in the mood for tiny crustaceans, you could also browse one of these cookbooks for a winning date-night recipe.

What are you up to this weekend? Any recipes you’re looking to try? Have you ever had langostino tails?