Happy Wednesday. Hope you enjoyed all the guest posts last week. If you couldn’t tell, I was in Italy. Specifically, I was in Milan checking out the World Expo and working on some writing assignments.

Deciding what to share for this week’s What I Ate Wednesday was tough! I enjoyed some really delicious food while I was away.

I arbitrarily picked Sunday, the midway point through my trip.

First off, I have to say that the free buffet breakfast at my hotel was awesome. Nothing fancy, but tons of options, whether your aim was to eat healthfully or to go to town on pastries.

Having already tried the scrambled eggs the previous day, I decided to go with boiled eggs, cucumber, tomato, and feta, 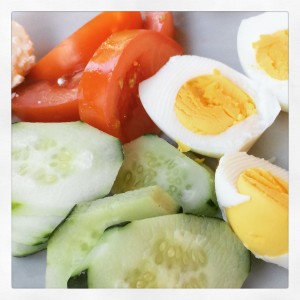 which I put on these rye toast things I found and liked so much I snagged a few extra of to have on hand for snacks.

The hotel had a pretty decent gym, which I made use of, even though I did tons of walking. It was more just…a way of staying in some kind of routine? On the days I didn’t have a particular time/place to be somewhere, reading on the elliptical and contemplating what I felt like doing for the day was a treat.

Anyway, Sunday, I had some time to kill before meeting a group for a walking tour, so I brought my Kindle down to said gym and read Aziz Ansari’s Modern Romance for a while as I did the hamster wheel thing.

I had an apple (also swiped from the buffet—I sound like I’m in college again) before rushing off to the subway to meet the group. The tour was a great time. It was 3 hours long and involved lots of must-see spots in Milan, including a visit to the Last Supper. Really neat.

Go figure, by the time the tour ended, I was ravenous and had only a general idea of where the hell I was, so I wandered on foot until I found a cute little cafe, where I enjoyed a delicious salad and grilled salmon. After another hour or two of wandering (and okay, shopping), I enjoyed some banana sorbet with dark chocolate gelato. 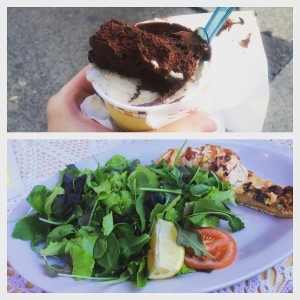 In “all things in moderation” math, I skipped the wine and bread at lunch because I knew I wanted gelato.

So after some more shopping/wandering/baking in the sun, I got back on the Metro and went to the hotel, where I checked in with Rise clients and wrote until it was time to go to dinner at a restaurant where I thought I’d made a reservation, but apparently, I had not, as the restaurant is closed Sundays and the reservation software I used did not know this. Anyway, the owner and his wife were super-friendly, and happen to be in NYC a lot, so we exchanged contact info and I promised to come back later in my trip.

I wandered a bit until finding my way to Pasticceria San Gregorio, a place I’d stopped at briefly my first afternoon in Milan. I ordered bresaola with arugula and shaved parmesan cheese—plus a glass of red. It was a wonderful meal. 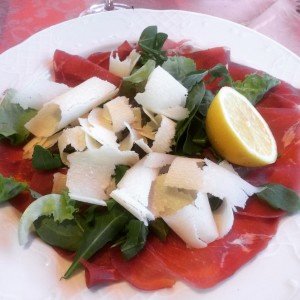 Since I had a busy day ahead, I called it a night early and went back to my hotel to write some more and read in bed. Go figure, within a hour, my stomach started growling (guess that’s what happens when you walk 20,000 steps), so I had another pack of those rye bread/toast things with some peanut butter I’d brought. Because I did not have a knife, I had to squeeze the PB onto the bread, but I made it work, more or less. 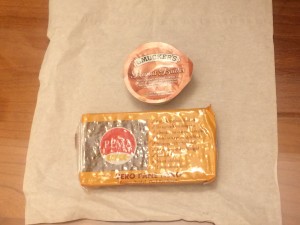 So that’s just one day from my trip. I’m so glad I was not dealing with any disapproving boyfriend voices in my head on this trip like the last time I was in Italy. I really appreciated being able to enjoy whatever I wanted on my own terms. I don’t like to spend a lot of time talking about food as freedom or waxing too girl-power poetic, but there is certainly something to be said for being in touch with what you want and need and basing your decisions on that instead of on what someone else things you should want and need.

What were some of the food highlights from your last vacation?