What I Ate Wednesday #286: Basic Fall

Happy What I Ate Wednesday. Hope you’re having a great day. My sister told me about a funny thing she saw on the internet the other day. Something like, “If you look in the mirror and say ‘Pumpkin Spice Latte’ three times, a white girl in yoga pants will appear and tell you all the things she loves about fall.” That gave me a laugh because, well, yeah.

This week’s installment of this blog link-up marks the first of fall 2016, so I’m going to share some snaps from this past weekend, which had all the wonderfully basic hallmarks of fall happiness: apple picking, hot coffee, baking pie, and even some yoga pants, cute dogs, and sushi thrown in for good measure. The only thing missing was a pumpkin spice latte.

Friday night I took a bus out to the burbs and went out for all-you-can-eat sushi with my sister, her boyfriend, and his brother. 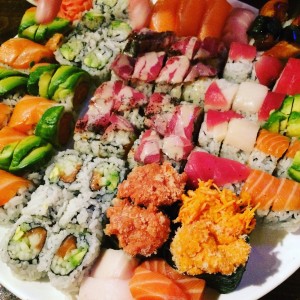 We brought a bottle of wine with us, which we enjoyed in these…goblets. 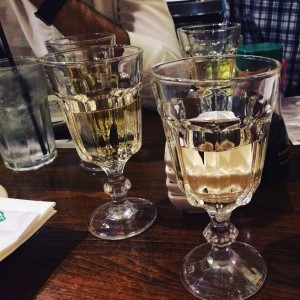 Saturday morning, my sister and I had plans to go apple-picking, so we stopped at a diner along the way. I enjoyed a veggie egg white omelet, some of the potatoes (I always eat all the crispy parts) and a piece of bacon.

We shared some venison jerky and a few sips of cider before heading home with our giant bag of apples and plans for sweet and savory recipes.

Lunch was picked up from a b.good outpost. I ordered their kale salad, which had roasted squash and brussels sprouts, plus beets and manchego cheese. I left off the sunflower seeds and added chicken. 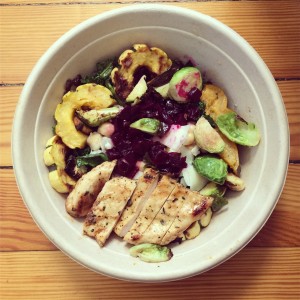 We spent the afternoon cooking. On the agenda:

A soup similar to this roasted apple and butternut squash one. We added cannellini beans, turkey sausage, and spinach, plus fresh rosemary. Formal recipe to come. 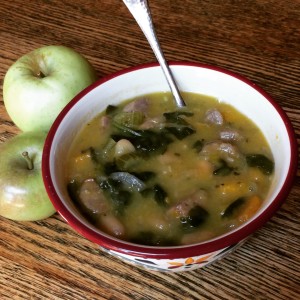 We also made a pie. My  mom showed us how to improvise a pie crust. This one had flour, canola oil, a dash of salt, and col water. The filling is the same as her classic recipe: apple, cinnamon, maple syrup. Because we didn’t have enough crust for a top, we made an oatmeal crumble topping (oats, flour, cinnamon, dash of salt, maple syrup, vanilla, and canola oil). 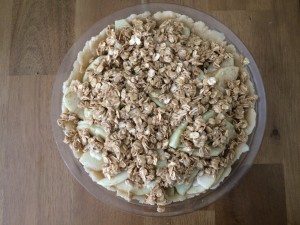 We had late dinner plans, so I had some Greek yogurt with chia seeds and a few strawberries around 4:30 while catching up on a couple work things (yes, I am guilty of working on the weekends—only human!) before going to get my nails done.

Dinner was at a local Italian restaurant. I shared some grilled calamari 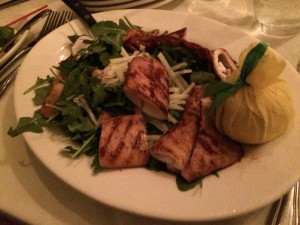 as well a grilled eggplant appetizer with a red sauce (not pictured) and also enjoyed a simple salad. For my entree, I had grilled rainbow trout with sautéed broccoli rabe. Hit. The. Spot. I was surprisingly hungry enough to finish almost the whole thing. It was so good. 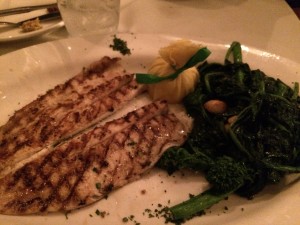 To drink, I was order a Maker’s Mark, neat, and was given this…martini glass full of whiskey. Part of my would like to say I finished the whole thing, but I only made it a little more than halfway through. 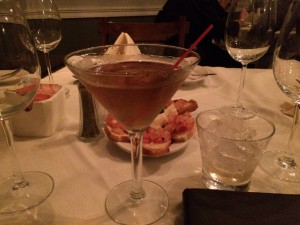 I slept like a rock that night. It was glorious. Eli made himself nice and cozy for bedtime too. I love that little dude. 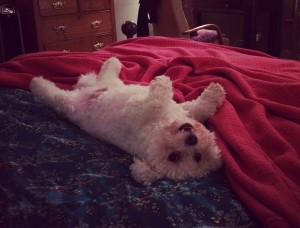 Sunday morning involved a workout and yoga with my mom and sister before heading back to the city and enjoying a relaxing catch-up before dinner out. Perfect weekend.

Have you ever gone apple-picking? What are your favorite apple recipes?