Happy Thursday! In the spirit of today’s “thinking out loud,” I thought it would be a good time to share a few thoughts on some food news from the week.

On Tuesday, a September ruling went into effect in NYC requiring restaurants to place a salt shaker icon next to items containing more than 2300 mg of sodium (about a teaspoon), which is the recommended daily limit.

Why the fuss? Too much sodium can lead to water retention, bloating, dehydration, elevated blood pressure and, over time, hypertension, a serious chronic cardiac condition. It is also harmful for kidney health and can complicate other health issues a person may have. Data shows the average American consumes around 3400 mg of sodium per day.

To put those numbers into perspective, a TGI Friday’s New York cheddar and bacon burger has 4,280 mg. If you go to Chili’s, a boneless Buffalo chicken salad will set you back 3,460 mg. That’s before fries.

When it comes to sodium, I think it’s best to save it for stuff that’s supposed to be salty—cheese, pickles, (very occasional small servings of) cured meat, soy sauce, miso-based dishes, and the like. We can incorporate these foods into our diet by balancing them out with lower-sodium choices. The problem is that sodium is found in unexpected places like sliced bread, processed foods, canned goods like sauces, condiments, frozen meals, and on and on. Checking labels can make a big difference, but it’s not the only factor. Restaurants are notorious for using excess amounts of salt in their dishes. Though an occasional meal out won’t break the sodium bank if you budget for it, for people who eat most of their meals outside the home, the numbers can add up quickly without us even realizing it. 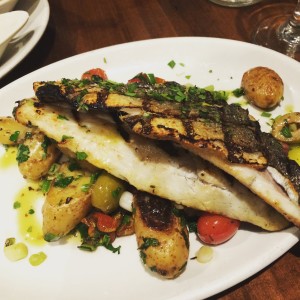 This ruling will primarily target chains. Though these restaurants were expected to start posting the labels this week, the city won’t start collecting fines for violations until March.

I’m sure a lot of people are going to whine about “nanny state” this, that, or the other, but I think that this kind of information can be valuable and help guide people to make better choices. I’m also curious to see whether when restaurants might make an effort to reduce salt in their recipes, as a lot of food manufacturers have been doing over the past few years in an effort to gradually reduce levels.

I guess time will tell, though. Anyway.

Do you think a salt “warning” icon would steer you away from a particular food on a menu? Do you think these kinds of rulings are helpful?