Thursday already. Ready for a little thinking out loud? Here’s a weekly dose of randomness.

This week’s post has an accidental “food cravings” theme. As a dietitian, I always encourage clients to tune in to what they’re craving and why. Often the body is trying to tell us something, whether it’s physical or psychological.

1.) Food cravings are a funny thing. When I was younger I had a crazy sweet tooth, and in the past five years since quitting diet soda I’ve developed quite a savory tooth. Like a lot of ladies, there’s a cyclical nature to these cravings. For example, the salt thing seems to kick in during placebo pill week, when I want all the miso and all the smoked salmon. I also crave specific meats that time of the month. Sometimes it’s red meat, but this time around its chicken. Whatever works.

2.) The crisp note in the air yesterday morning had me craving pumpkin oatmeal, so I made that got breakfast after yoga. I added some sliced roasted figs, tahini, and a drizzle of maple syrup. 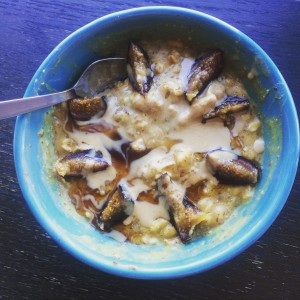 3.) Another weird craving: crappy deli coffee with skim milk and Splenda. Total nostalgia trip back to days when I had time to, like, be interested in sex and write poetry about it. I’m sort of kidding.

4.) Speaking of a general lack of interest in sex/dating (with a select few exceptions) most of this past year, being 100% not pregnant allows me to enjoy all the sashimi I want. Within reason, of course. I enjoyed a lunch box special on a recent visit to NJ (similar to this one below) that came with a salad with ginger dressing and miso soup that tasted like it was made with white miso-my favorite. It was divine. 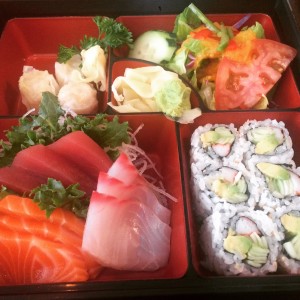 5.) This has nothing to do with food cravings I don’t think, but hey, today’s all about random…I bought a new computer recently after sitting on an Apple gift card since Christmas. My current laptop was a dinosaur in Mac years, but I’m holding onto it so I have something to use for writing and internet that I can travel with or throw in my bag to hit up a coffee shop. The idea of having two laptops seems ridiculously extravagant, but given that such a huge portion of my income is dependent upon being able to write, blog, and email, it’s actually logical. In the past, I just did a complete transfer via wi-fi or time machine, but this time around, I’m experimenting with transferring just the files and programs I want, little by little, via Air Drop and flash drives. It’s a little bit tedious, but weirdly exciting. Not having 12 years of electronic baggage is a thrilling concept. Or okay, still plenty of baggage, but just the baggage I want.

What are some foods you tend to crave?