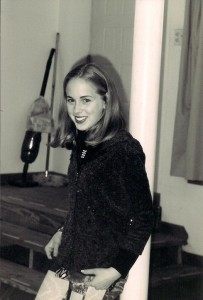 Around age 13, I realized I just needed to embrace my nerdy side instead of trying to hide behind Abercrombie and Fitch sweatpants, which were totally the Thing circa 1999. I was not fooling anyone, least of all, myself.

I don’t have many pictures of myself around that age, but in the spirit of Throwback Thursday, here’s one in which I appear to be sporting a fuzzy hoodie and grown-out bob. I really hope I am not also wearing the camo cargo skirt and chunky black sandals I was oh-so fond of in 8th grade, but it’s totally possible, as I wore them basically every other day. Actually, sometimes I wish I still had them. I should not admit this to the internet but, well, I just did.

For grades K-6, I went to a school that had no kitchen, so packed lunch was a given during my formative years (thanks, Mom!). Going to middle school and trying to navigate a cafeteria full of unappetizing foreign things like tater tots while still wanting to buy lunch like the cool kids was…interesting. My default became a sesame seed bagel with peanut butter and a carton of milk.

It never occurred to me this was weird until one day someone asked, in only the way a 13-year-old can make the simplest question sound mean, “Why do you put peanut butter on your bagel?”

Sigh. I spent so much time as a teenager trying to learn not to say things like that, but all these years later, trying to date in a city overrun with man-children, I often find myself wishing I could so easily say what I’m thinking. Or at least throw the drink and leave before he has a chance to learn my last name.

Anyway, by senior year of high school, I’d gone back to my brown-bagging ways. Though I enjoyed getting free meals as a dietetic intern (I still get a little nostalgic thinking about the vegetarian chili and the tilapia at NYP), I didn’t mind going back to making my own lunch when I started working as an RD. I find that packing lunch keeps me grounded in the middle of busy weeks. It’s also a great way to save money, as it’s easier to inspire myself to make tasty things to enjoy for lunch the next day than it is to rest the siren call of Amazon prime every time I “need” something. It’s more a fun habit than a chore.

My neat-freak habit does find its way in sometimes, though…After some gross spills many years ago, I am that person who wraps everything up and uses rubber bands, even on my “leak-proof” stuff! 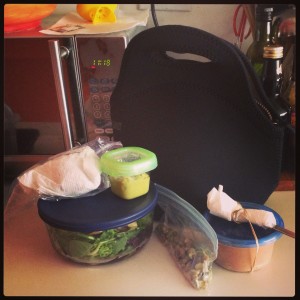 As far as the food goes, on my days at the hospital, I tend to bring breakfast, lunch and a few snacks to fill in any gaps, knowing that I’ll most likely have something light when I get home from work.  Though I tend to eat larger meals on work-from-home days, I tend to bring smaller items in my lunch bag since I may not have time to sit down to a full meal. So breakfast/lunch parts 1 and 2 is not uncommon. Not my favorite way to eat, but it works!

I’ve had my lunch bag from Built for a good four or five years now, and I love it! Throw an ice pack in the bottom, and everything stays cold—no refrigerator, no problem.  Even better—it’s machine washable. Love that. My whole damn life is machine washable at this point.

Do you buy lunch or bring your own to work or school?