When I first moved to New York back in 2008, I decided that at any restaurant that served spanakopita, I would try it. It seemed as good a benchmark as any to compare one establishment to another. I had some that were very good, and some that were very bad. I think the craziest was the time I cut into the slice and pulled out a blue…rubber band. That might have been what finally did it for me. 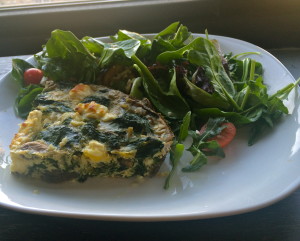 After going to a Greek cooking class a few weeks ago where we made spanakopita, I couldn’t get it out of my mind. Because the idea of rolling out and dealing with the phyllo dough sounded like a bit too much of a hassle for my ADD weeknight brain, I though a spanakopita-inspired frittata sounded right up my alley. At the last minute, I decided to add mushrooms because I was craving them like crazy. Though not traditional, per se, this came out fantastically. With a side salad, it’s perfect for lunch or an easy dinner that’s on the table in under an hour.

Have you ever tried spanakopita?