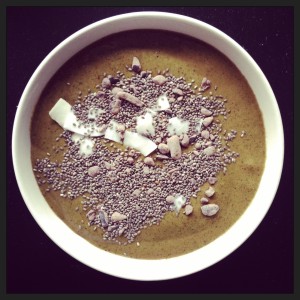 Happy Monday! Hope your week is off to a good start. After yesterday’s surprise bridal shower for my friend Rachel yesterday (read: champagne & cake), I was more than ready to start off with some hot yoga and a green smoothie this morning. Yep, this one again.

To give this a little more staying power, I added an extra tablespoon of hemp protein powder and topped it off with some chia seeds and roasted coconut chips. The cacao nibs were just for taste—and maybe a modest dose of antioxidants.

I got a few questions recently about quantities for add-ons to smoothies. In general, I think it depends on whether you want your smoothie to be a meal or a snack, and how many things you’re adding. For example, since I was adding three different things this morning, I used about a teaspoon of each. If this were just a snack, I’d probably stick to just a teaspoon of one topping. Of course, if the idea of putting anything on top of your smoothie is weird, just keep doing what you’re doing and ignore this mad scientist business.

Oh, but about that cake—it was adorable! It was lemon cake with raspberry preserves in the middle and decorated with fondant. The bride-to-be loves Ms. Piggie, and her reaction to seeing the cake toppers was a highlight of the day. 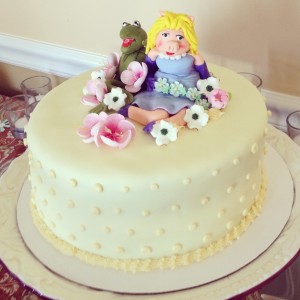 Someone’s boyfriend’s cousin made this, I believe, but if someone can tell me who to give credit to, I’d love to brag about them here!

As an RD, I get a lot of questions about sugar. Though I encourage people to read labels and look for hidden sources in processed foods, I also say to save your sugar intake for “the good stuff”: weddings, birthdays, whatever celebrations or occasions mean the absolute most to you. Or at least those occasions where the dessert means a lot to you. For some, that might be a few times a year. For others, it might be to allow themselves to enjoy one “real” dessert a week/month. Rather than focusing on your version of normal versus other people’s version, acknowledge what your priorities are and plan around that instead of wasting time beating yourself up for not being on a sugar detox like that person on Facebook/Twitter/TV.

However, this is a spectacular example of when to turn in the opposite direction: 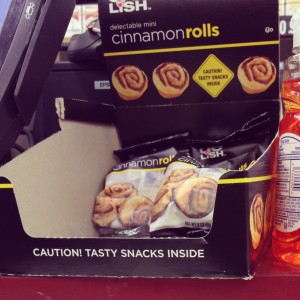 Though I’d love to say it’s stupid to market packaged crap to customers on drugstore checkout lines, it is actually very smart marketing: keep people sick by selling them junk food, and they’ll need to keep buying treatments for what ails them. However, it bugs me that these mini cinnamon rolls were placed right next to some stray bottles of dish detergent. No logic, whatsoever. My Type A left brain is tweaking out right now. The right brain is giggling.

Do you limit your sugar intake? What treats do you think of as “the good stuff?”