When I moved to New York at age 22, I basically knew my boyfriend and a handful of people I’d worked on lit mags with or read tarot cards for in college—almost all of them guys, which didn’t thrill the boy-man-friend-thing. My family wasn’t far away, which was nice, but my sister was still in Boston, and my closest friends were scattered around the country. 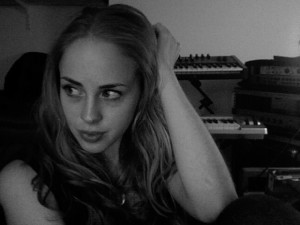 Me at 22 in Hells Kitchen—Vintage Selfie

That first year was hard in ways I never could have expected, and the lack of female friends was especially difficult. I spent a lot of time taking long walks alone through new-to-me neighborhoods and wondering if I’d made a mistake by moving to be with this practical stranger in his strange city. Maybe it was supposed to be this hard, I thought. Even if it wasn’t, I was afraid to tell anyone how unhappy I was—I was too stubborn. I had no idea who to talk to about that heavy blanket of doubt I had wrapped around my shoulders.

However, this was also the year where, in a cool, clear moment, I decided to think about what kind of work would make me feel good (as opposed to doing what I thought or was told I “should” be doing).  Working in an environment where the focus was on wellness ultimately inspired me to go back to school to acquire the skills and credentials I needed to help others restore and maintain health. I was so passionate and so sure about this new turn in the path, when my boyfriend tried to talk me out of grad school, I enrolled anyway and even requested to fast-track my matriculation to the summer instead of waiting until the fall semester to get started.  You know when you know, and in retrospect, I guess I knew enough to not give a f*** what he thought. It was bold, sure, but probably the rebellious act of which I am most proud.

Of course, grad school was not easy. As someone who’d never finished chem in high school, it was certainly a rude awakening at times. And, um, can we talk for a second about the time someone sabotaged my Orgo experiment? Who does that after age, like, 15?  I actually called my program The Shark Tank (competitive waters, at least pre-dietietic internship). Studying, exams, research papers—this was all new territory, but as a career-changer, I was even more determined to prove myself than I probably would have been if I’d done this stuff as an undergraduate.

However, one of the wonderful surprises about the four years I spent in grad school was the amazing people I met. One of the greatest pleasures I have had as an adult is to be in a room full of strong, brilliant women discussing things they care about—usually over delicious food. The other night, as we giggled about hospital misadventures and caught up on our lives, I was reminded again of how lucky I am to be able to call some of these women my colleagues and friends. 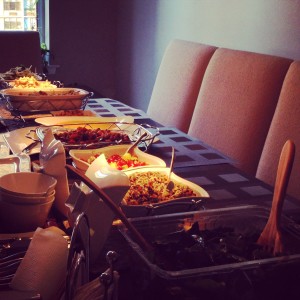 I took a little of everything. My friends are very good cooks—great examples of how healthy foods can be tasty! 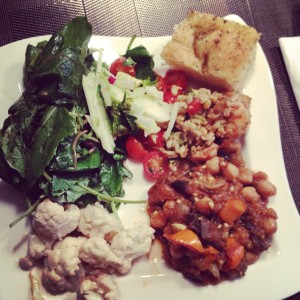 Clockwise from top left: kale salad w/ dried figs; apple-fennel salad; avocado & tomato salad; homemade focaccia; shrimp stir-fry; eggplant & chick steak; tahini cauliflower. I also had a few bites of a lentil salad that had goat cheese and a pureed squash & celery-root soup. Everything was wonderful! I definitely enjoyed some leftovers for breakfast the next morning.

Not that long ago, someone asked me if I regretted that time I spent with the person I moved to New York for. My response was absolutely not. We all make the choices we make—where you’ve been is how you got to where you are. All things considered, I’m a happy camper.

How long have you been living in your current city? Do you have a lot of female friends? What’s your go-to dish for a potluck dinner?