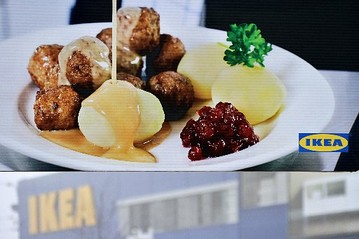 On Monday, Swedish retailer Ikea announced it had recalled a batch of frozen meatballs sent to over 12 European countries after food inspectors in the Czech Republic found horse meat DNA in packs labeled as pork and beef. As  reported in The Wall Street Journal, these 2.2-lb packs, sold under the name Kottbullar, went out to stores in the Czech Republic, Slovakia, Hungary, France, the U.K., Portugal, Italy, the Netherlands, Ireland, Cyprus, Greece, Spain and Belgium.  Yikes!

The part that I find most upsetting is not that it’s horse meat but that the horse meat isn’t labeled—not like it’s “supposed” to be there, but still. If a person were to knowingly purchase horse meat, that would be one thing, but for those with allergies or dietary restrictions or even just lack of desire to eat horses, this is not good. It’s also scary that Ikea is only the latest company to be affected by a European horse meat scandal.

In a statement posted on its website, Ikea said, “Our own checks have shown no traces of horse meat. Now we must of course look into this further.”

I’ve never had meatballs from Ikea, but I know a lot of people who totally think they’re worth the ferry ride to Red Hook. Or the road trip to Ikeas that do not involve passage by boat. I wouldn’t be surprised to hear about a few changed opinions, though…

Have you ever had Ikea meatballs? Even if your area wasn’t affected (the US, for example), would you still eat them after hearing about a horse meat-related recall?