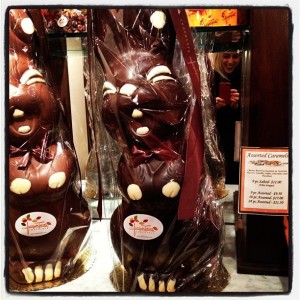 Let me start by saying that there must be a god because miraculously, I have as yet to see a photo of me at my Confirmation in the eighth grade make its way onto Facebook. Dear Mom, this is not a challenge.

That said, I’m one of those people who checks off the “spiritual but not religious” box on surveys and the like. My mom wanted my sister and I to grow up with Catholicism as a frame of reference but encouraged us to  keep an open mind and make our own decisions. My father, who is (non-practicing) Greek Orthodox just said to listen to our mother on that one.

Growing up, some of my more pious friends (nothing like a god-fearing pre-teen) were outraged and mortified by the fact that I found certain elements of our shared religion funny or that I found many opportunities for humor. Clearly, not much has changed. I should probably not admit that I told the Monsignor I wanted to take Lilith as my Confirmation name, mostly to see what he would say. He suggested “A nice Catholic name, like, Catherine” as an alternative. To my credit, this was the year my (very religious) grandmother died at age 61 after a long battle with cancer. As if being 14 weren’t enough, I was sorting through a lot of questions about life, death, and what comes after. I had a head full of “why” and a big, f***ing mouth

Anyway, this past weekend, my cousin made her Confirmation. Though I won’t say anything to take away from the significance of the ceremony performed as a symbol of all these tweens coming into adulthood in the eyes of the Church, I have always found it exceedingly cruel that this ceremony culminates in the smearing of oil across 14-year-old foreheads. Seriously!? That never has and never will be okay. I don’t know about you, but my forehead did not need any additional oil at that age, holy or not.

What is definitely okay, though? These wonderful fortune cookies my aunt and uncle got for the party. This was my favorite: 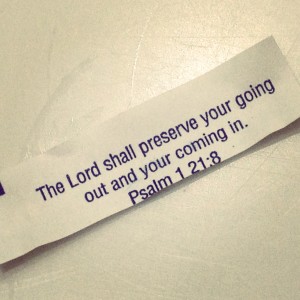 If you know me at all, then you know exactly what I cannot help adding to the end.

I was curious to know the nutrition facts in a “serving” of The Body of Christ—aka one communion wafer. 1 calorie and 1 grams of carbs, supposedly from sugar. Good to know.

What religion(s) did you grow up with?