What to Make This Weekend

This weekend, a lot of us are taking a little break between festivities, maybe banking some sleep  in anticipation of New Years Eve? I’m also sure I’m not alone in being surrounded with a wealth of leftovers. As far as food is concerned, my family goes all out on the holidays. Exhibit A: 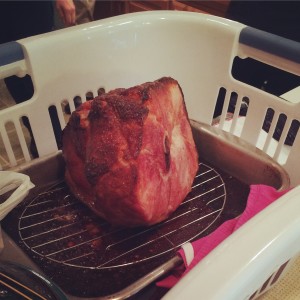 Nothing says, “Merry Christmas” quite like a ham in a laundry basket. My mom brought this over to my aunt’s as an addition to the standing rib roast and multitude of sides also on the menu for the day. Naturally, there is a lot left because we had enough food to feed, like, 50 people instead of 20. Ham is a lot leaner than many other holiday meats, but it can be high in sodium. That actually makes it great, though, for adding flavor to foods that would otherwise be a little bland. A little can go a really long way. I think my favorite thing to do with leftover ham is put the bone in soup. That still leaves quite a bit, though. In case you don’t have a pet lama to pawn extra ham off on, here are a few other things you can do with the leftovers:

*Ham on Rye. Sorry—I’ll take any excuse to make a Bukowksi reference. Whole wheat bread would add more fiber to your sandwich to to get your digestive system kicking after the holiday sluggishness, but you could say f*** it and do a Cuban sandwich.

*Green Eggs and Ham: Rachel Ray’s take is adorable, but for a healthier twist, try poached eggs over sautéed spinach and  sliced ham. An Ezekiel sprouted grain English muffin would make a nice side.

What are some of your favorite ways to use leftovers?