What to Make this Weekend: Food memories

Happy Friday! Hope you’re looking forward to a lovely weekend. I’m spending some time with some lady-friends tomorrow and then have to work Sunday, but it should be a nice work-play balance.

The other day I read this article, “How Jacques Pepin Saved My Life,” by Brett Martin, and it brought a lot of things to mind. It made me very glad that I didn’t write much in a public space about past breakups, especially the really rough ones. It also reminded me of several times in my life where I’ve had an experience that helped me swim back to myself, to borrow a phrase from the author. Though there are a number of ways to in which that can happen, the culinary experiences that wake you back up to the sense of food as pleasure and as a life-sustaining force have a way of sticking out. Here are a few of mine:

*Spending a whole day helping/watching a friend prepare his 18th birthday dinner. It was the height of summer, so the fresh blueberries and tomatoes are what stand out the most. And dessert. I thought I hated creme brûlée, but it turned out I had just never had it with chocolate chips. I spent most of high school eating reheated leftovers or frozen dinners standing up at my desk while I did homework (Amy’s stir-fry bowls in particular), so something about the emphasis on sharing food with your family as a celebration touched on a longing I hadn’t known was there.

*The first time I made a soufflé when I was 23. I suddenly realized how simple ingredients could add up to something spectacular.

*My first time tasting burrata at a restaurant in Italy in 2010. Actually, all the cheese I taste in Italy. And the vegetables, and all the wine I drank. A panzanella salad by the sea is also imprinted permanently into my brain. That whole trip changed the way I think about food and cooking and the experience of eating.

*The filet mignon with mushrooms I ate right after I closed on my apartment in 2012. It was also the first steak I’d eaten in years. It took me almost 6 months after the end of a long-term relationship with a vegetarian to reconnect with my carnivorous side. I used to over-think menu items so much, feeling pressure, even without that guy around, to order something meatless. I remember this particular lunch very well because it was just me and my dad. My ex-boyfriend’s vegetarianism and its not-so-awesome effect on me had always been a wedge between us. Because teenage rebellion dies hard, I was stubborn about letting my family see me eat meat for a few months after that relationship, even though I’d started to dip my toe back into the waters. Haha I wanted it to seem like I was coming back to the dark side on my own terms. Anyway, on this particular afternoon, I ordered exactly what my mind and body were calling out for and didn’t think twice about it. I mean, I was a freaking homeowner now. Feeling sheepish about not ordering the most virtuous thing on the menu because of an old voice in my head suddenly, finally seemed stupid.  And yes, I have a picture: 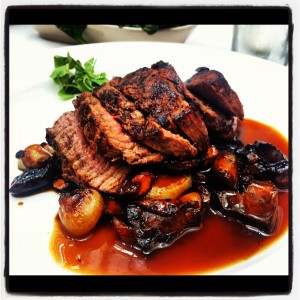 *There are plenty of other items on here, like the time I realized how easy it is to make pulled chicken in a slow-cooker.  The first time I shelled my own lobster after a day at the beach (with a man-child who would ghost me a week later, but still—the lobster!). The first time I made scallops. Showing someone else how to make those scallops. A night spent over $1 oysters and bourbon at the start of a snowstorm. A random meal out with my mom and sister in Miami, when I was still crying several time a day after a tough goodbye but magically paused to eat some of the best ceviche I’ve ever had.

As we get into this weekend, I want you to think about experiences that have brought you back to yourself, about some of the foods that have woken you back up to your senses. Apparently almost all of mine involve meat and/or seafood and learning how to do things myself.

So you could make seafood this weekend! How about those scallops? I like them best over red lentils with greens cooked with shallot and, ideally, some pancetta, but you can have them over salad, over polenta or grits or whatever the heck does it for you.

What are some of your strongest culinary memories?