What to Make this Weekend 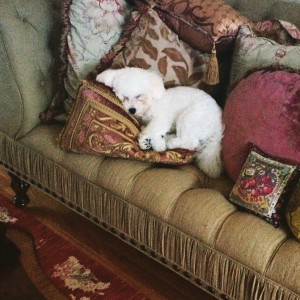 So, this week started out kind of scary, when Eli ate a bunch of rat poison and had to be rushed to the vet. Luckily, he is okay now. They induced vomiting and were, like, “So, Eli ate a bunch of rat poison, but here’s the good news.” My parents didn’t even know they had any rat poison in the house (they’re super-careful about these things and think it may have been put there by the former owner at least before they moved in 13 years ago), and I just so happened to be there and see some weird blue stuff in his crate—likely within a few minutes of him finding and eating it. Now he’s on vitamin K for a month.

First it was the acute kidney failure and the renal diet, now this. Dude has, like, a f***ing posse of guardian angels.

I think all the crying on Sunday knocked down the door to my immune system, and then it got really cold and I got laryngitis. All-night coughing fits will do that, I suppose. That said, despite adequate sleep and my inability to speak above a whisper, I’ve been weirdly peppy. I bounded out of bed at 5 yesterday morning, like, “Hello, world!” Must be the Mucinex? I finally dragged myself to the doctor, where I was prescribed a 3-day course of Things I Would Normally Avoid. I do love the Dr. Evil pictures on the wall at the walk-in place, though. 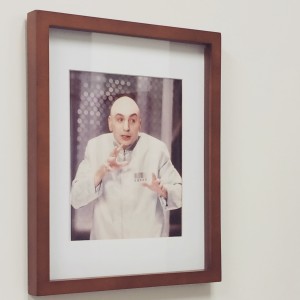 I’ve actually been doing quite a bit of cooking, as the food demo that was supposed to happen Thursday was canceled by the client, and I have tons of prepped food in the fridge. I am experimenting with freezing cooked quinoa and coming up with ways to use the 3 pounds of beets and 2 pounds of squash I roasted in anticipation of creating recipes in front of strangers. All for the best, though, because they would have had to crowd around me to hear as I tossed seasonal stuff with red quinoa while wearing gloves, croaking about fiber and carotenoids for glowing skin in the dead of winter. Full disclosure: It took me three tries to spell “carotenoids” correctly.

Turns out giant salads with makeshift hash (complete with shredded brussels sprouts, uncured bacon from the freezer, and eggs) are great ways to use up roasted root veggies and the like.

Here are some unrelated food things that sounded good to me as I perused the interwebs between coughing fits and gulping fluids.

*These Apple Peanut Butter “delights” from the Pioneer Woman look delicious. I love that she uses whole wheat English muffins too. You could skip the sugar, though, since apples naturally get sweeter when you cook them.

*This noodle soup from Gena Hemshaw of Choosing Raw sounds very nice to my sore throat. Something to make once I’ve drained my supply of soups (including last week’s lentil soup) from the freezer. I am not allowed to make new soup until I’ve made space for it in there.

*These adorable mini-cakes in mason jars sound like fun and look super-easy to make, even for people like me who do not bake. It’s not exactly picnic weather, but I’m fever-dreaming about Central Park in the summertime.

*This isn’t a recipe, but this Sh*t Juicers Say video totally made my sick-day yesterday. Also love that they use music by Spoon and Belle & Sebastian.

What are you up to this weekend? Any recipes you’re looking to try?