Another week, another What I Ate Wednesday. This is actually a short week for me because I’m heading out of town on a little trip with the fam over the weekend—so excited!

I’m rushing to wrap up some stuff before heading to clinic, but here’s a little WIAW action for you. This week I’m giving a little glimpse at last Friday, when I was working at the hospital where I do occasional per diem shifts.

Desk Breakfast: This is basically my make-ahead berry cheesecake power bowl / yogurt mess  with a spoonful of coconut milk added to thin it out. This was a great way to charge up for early-morning rounds. That and the black coffee. 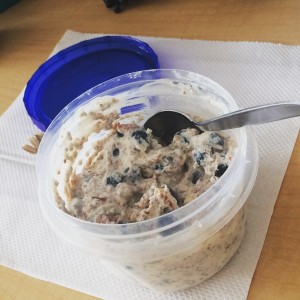 As a per diem without regular floors to cover, you really never know what you’re going to get when you show up. This was an incredibly busy day with lots of last-minute surprises. 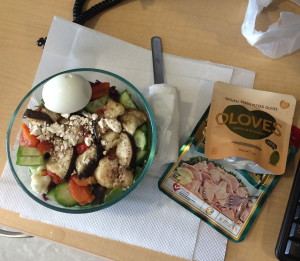 A little later I had an apple and an iced coffee. When I got home from work I threw together a quick smoothie while I waited for the oven repair guy to arrive.

Dinner was all about using up whatever was left in the fridge, since I had an order coming from Fresh Direct later in the evening in preparation for Saturday’s potluck brunch. Pickings were pretty slim, but I threw together a pretty satisfying meal of shredded red/purple cabbage & feta salad tossed with eggplant dip that I thinned with water to make a thick dressing. Then I made an egg-white sandwich with more eggplant dip and roasted eggplant. The egg white was totally made in a mug in the microwave (pour liquids whites into a mug, then cover with a plate and cook in 45-second intervals until set) because I was tired/lazy. I was actually do this on a night I didn’t have a near-empty fridge. 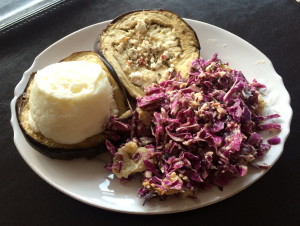 After dinner I had a piece of dark chocolate (still working through my stash from Valentine’s Day…pathetic but when you keep it in the fridge, it stays good!) and later, a sliced banana with some nonfat ricotta and PB2 sauce (1 tbsp each PB2 powder and cocoa powder, mixed with ~1/5 tbsp with water). Totally forgot a picture though. #bloggerfail.

I got a picture of this though. My personal rescue remedy. I actually take it through a good part of my cycle to manage aches/pains and maintain good digestion, but it’s also great for headaches and days you need to calm the eff down. Mission accomplished. 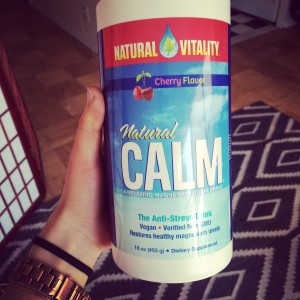 What are some of your memorable “odds & ends” meals made from remnants in the fridge?