What I Ate Wednesday #215: Minneapolis Eats

Happy What I Ate Wednesday. How’s your week going?

I was thinking that for this week’s installment of the weekly “what I ate” link-up, I’d share what I ate last Wednesday in Minneapolis.

As I mentioned in yesterday’s post, we had a great time at Travail last Tuesday night, so I’d been expecting to wake up at least a wee bit hungover. But no. I popped out of bed at 5:30 (to my credit, because of the time change, my body felt like it was 6:30) and had a few unexpected free hours, so I went to the hotel gym (to read Me Before You on the elliptical). Afterwards, I bought some coffee and milk from the Starbucks downstairs. That plus some leftover cereal and a banana from the previous day’s events made for a perfect post-workout breakfast. 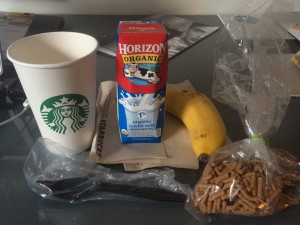 Read breakfast was to happen much later, at the General Mills headquarters after a tour. But first, this may have happened: 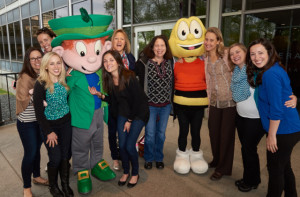 Um. Funny story: I was obsessed with lost ocean liners as a kid. Who am I kidding—I still kind of am (and totally all over this month’s 100th anniversary of the sinking of the Lusitania). I went so far as to write James Cameron a letter when Titanic came out in 1990-whatever to tell him all the stuff he got wrong. Mostly it was the collapsible lifeboats I took issue with. I am so embarrassed for my younger self. Anyway. I had no idea that General Mills built the submarine that went down to the explore the wreck. I sent my family a text joking that my whole life had just come full circle. 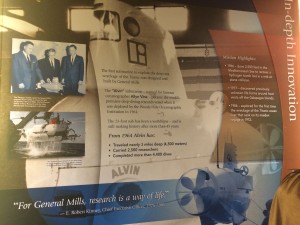 But right, breakfast. I generally loathe sweet yogurt (and there was no plain available), but I wasn’t in the mood for hot oatmeal or cereal, so I just rolled with it and opted for this 2% Greek honey flavor with a little bit of raw oats, flax, chia, and cinnamon and some fruit on the side. Since it was nearing 10 am, I was really hungry and didn’t want to make a fuss. I feel like when you avoid added sugars in your yogurt 99% of the time, it’s not the biggest deal to have a little. 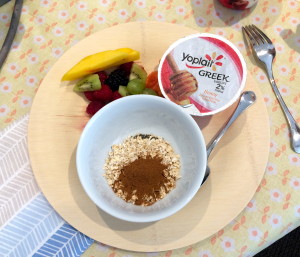 After some morning events, we played around in the Betty Crocker Test Kitchen. I made a potato pancake that contained:

My recipe made enough for two people, so I only plated one serving and garnished with some plain Greek yogurt, tomato, and chives. Basil and a drizzle of olive oil could also have been nice. The event photographer made it look way prettier than my iPhone did: 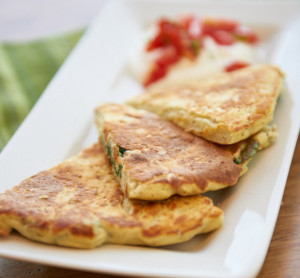 Here’s my cheesy “look what I made” photo! 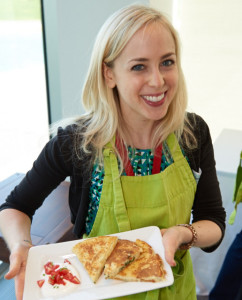 I was actually really impressed by the lunch spread (or the overall great quality of the food—I think they knew they were hosting a group of RDs and healthy living bloggers, so…). I enjoyed a mix of salad, roasted veggies, and chicken.

Later in the day, we enjoyed some fresh fruit between activities and then suddenly, it was already time for me to head to the airport. After clearing security, I had a little time to kill, so I managed to sit down and have dinner before my flight. Airports can be hit or miss in terms of food, but I enjoyed a lovely meal of nicoise salad and ginger kombucha. 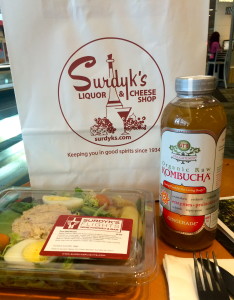 A few hours later, I had some dry-roasted edamame just before landing. I was so tired by the time I got home, it was lighst-out almost right away. What a whirlwind!

What was the best—or worst—airport meal you ever had?

To see more WIAW from other bloggers, head on over to this week’s host Arman’s site or visit founder Jenn’s blog Peas & Crayons.