Happy What I Ate Wednesday. How’s your week going? Can you believe it’s a new month today? I am so into that.

Here’s what I ate on Monday, when I was working from home on a bunch of consulting, recipe, and writing projects. It ended up being a very active day, as I did cardio in the morning while I waited for the laundry to be done, and then between folding said laundry, running errands, prepping food for the week, and a few errands/appointments, I felt like I barely sat down. I’m still not sure exactly how I got my work done, but somehow it all happened. I even had time for a yoga break, which was freaking heavenly. I’ve been vinyasa-ing my feelings lately. Whatever works.

Breakfast: Pumpkin-apple oats (similar to this recipe but with apple instead of cranberry) with peanut butter and a drizzle of maple syrup. Black coffee x 3 because sometimes that’s how I roll. To my credit, they were small cups. When I make oatmeal on a work-from-home day, I’ll often make a double or triple batch and pre-portion out extra servings so I can just grab and go the next morning. 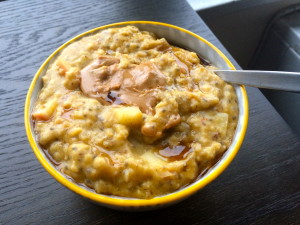 Lunch: I’m going to share a recipe for this soon, but basically, it’s red lentils with a spicy tomato-mushroom sauce, spinach, and chicken chorizo. I added a poached egg and a bit of feta. There was a lot of paprika in this, and it was so good. 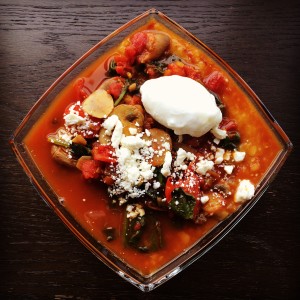 Snack: A few hours later, my stomach started growling, so I had some plain Greek yogurt mixed with coconut flour, cocoa powder, and cinnamon. I added blackberries on top and forgot to take a photo because I was shaky-hungry. Here’s a recycled pic. 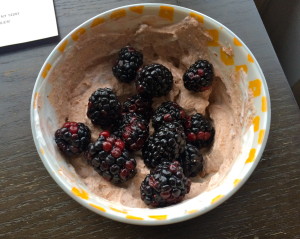 Dinner: A chickpea flour pancake with babbaganoush and a mix of kale and other veggies that were in my fridge. Whatever works. This was actually delicious, even though I had to eat while catching up with Rise clients. 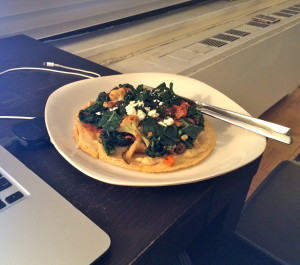 Dessert: A chocolate truffle from a box my mom gave me as a gift—my wildest PMS dreams come true. 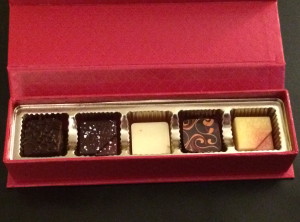 Bedtime Snack: A sliced banana with non-fat ricotta and a little more maple syrup (~1/4 tsp). Too tired to take a photo.

Do you eat at your desk ever? What’s your favorite kind of chocolate truffle?
To see more WIAW from other bloggers, visit founder Jenn’s blog Peas & Crayons.