So wow, somehow it’s my 200th What I Ate Wednesday. 200 Wednesdays of sharing my food intake and counting. I don’t know if this is impressive or crazy. Maybe both? Looking over almost 4 years worth of these posts (What. The. F—) kind of blew in my mind. Seeing the ways in which your eating habits change and stay the same over time says a lot about the path of your life and the people who come and go—and the influences that stick around. It also says a lot about the improvements in iPhone cameras over the years—at least for me!

A few of the main things I’ve noticed about my diet in the past four years is that I eat less sugar and more animal protein. Tofurkey sausage is no longer a regular thing, but oatmeal, salads and yogurt are still some of my staples. I will never be over soup. Egg whites are a more recent favorite, but peanut  butter has pretty much always been on the shopping list.

For the hell of it, here are a few examples of previous What I Ate Wednesday posts:

And here we are, February 2015, Mercury Retrograde What I Ate Wednesday—perfect time for reflecting on the past & present, what the future might look like. Here’s what I ate Monday, when I was working from home. It was a dreary day, so I was inside a lot, but also really active, between some fiction-reading on the elliptical, yoga, cleaning, and food prep for the week. I felt a lot hungrier than normal—surprise, surprise. Here’s what was on the menu.

Breakfast: Oatmeal made with ground flax, egg white, cinnamon, vanilla, and half a mutsu apple (from Farmigo—so good!). I added a little fig butter and chia-flax peanut butter. 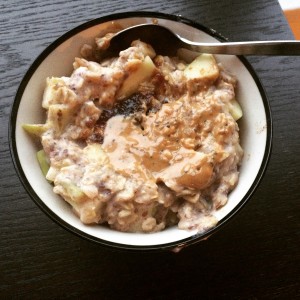 Lunch: A big arugula salad that had some roasted pepper, cauliflower, and kabocha in it, along with hemp seeds and a hard-boiled egg. I also had a slice of Ezekiel toast with hummus and thin-sliced roasted eggplant. The only thing I thought to take a picture of was this miso mushroom soup I had just made. Recipe tk… 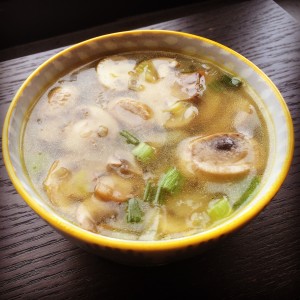 Snacks: Later in the afternoon, I had the other half of the apple from breakfast. A few hours after that, I had some plain Greek yogurt with 1 tbsp each coconut flour and cocoa powder. I threw a handful of blackberries on top. 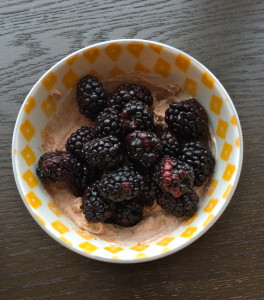 Dinner: I actually made this whole wheat spaghetti with brussels sprouts, bacon, and a poached egg on top. Pardon the recycled photo. The only difference was that I used shredded sprouts this time, and I think that will be how I make this from now on. 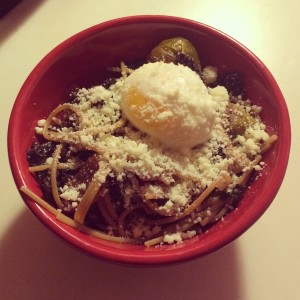 There was also a small glass of pinot noir. Nothing before bed, as dinner was really late.

How have your eating habits changed over the years?