Another week, another What I Ate Wednesday. I shouldn’t phrase it that, way, though, because I feel like every week is a whole new story lately. For example, this week brought a crazy snowstorm to the Northeast. I hope everyone affected was able to stay safe and warm. A lot of the stuff I had going on yesterday was canceled, so it gave me a chance to catch up on some writing work and clean out my email inbox (It kept getting to 666 on my phone, which kind of freaked me out), so pros and cons.

This past weekend, I’d originally planned to go out to New Jersey, but the weather gods had other plans. It ended up being a nice weekend, though, and I got to see my parents on Sunday, when they came to the city to help me out with setting up a bedside table I bought over the holidays.

Sunday morning started with some black coffee and then later, a bowl of oats with chia seeds, egg whites, and blackberries, plus a little peanut butter on top. The PB with the flax and chia from Trader Joe’s is so good… 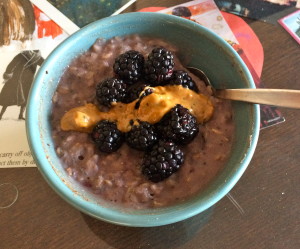 We went to a lovely restaurant called Josie’s for lunch. I’ve been there so many times over the years, and I’ve never had a bad meal there. I seem to be craving salmon like it’s going out of style lately, so even though I’d had it on Friday and had eaten fish Saturday night (sea scallops), I ordered the Mykonos salad, which also featured cucumber, olives, feta, and sun-dried tomato along with the seared salmon. Dressing on the side because “on the side” is a very big thing for me. 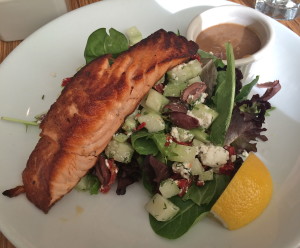 My sleep schedule was a bit off this weekend, so I was a little (or a lot) tired—a mix of good reasons and annoying inner clock reasons. I also still don’t feel like I’ve adjusted since being sick a few weeks ago, when I’d be up coughing all night. It also threw my hunger off a bit. After working on stuff around my apartment for a few hours after lunch, I kind of had to remind myself to have a snack before yoga. I had the usual cup of plain Greek yogurt with coconut flour and cinnamon. I topped it off with more blackberries. I’m officially on a food jag. I also officially forgot to take a photo.

After yoga, it took me a while to get hungry, so I eventually just threw a bunch of leftover roasted veggies and some chicken I’d made that day in the slow-cooker over arugula and called it salad when I added parmesan and vinegar. I also chopped up a pear and threw that in. On the side, I had an Ezekiel English muffin with black garlic spread and a little tahini swirled in. 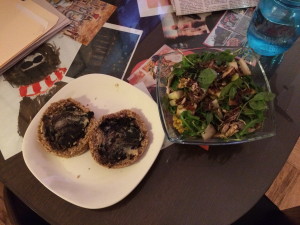 Capping off my Sunday with a Restorative yoga class where we basically laid on the floor with props and occasionally turned over was just the ticket to help me wind down before bed. I heart good sleep.

What did you eat last weekend? What’s your favorite way to wind down for bed?