Wow—and just like that, it’s What I Ate Wednesday again. Working a weekend always confuses my inner clock a little. Monday was my Saturday/Sunday and Tuesday was Monday again. Isn’t it crazy how ingrained the Monday-Friday thing is in our culture? I mean, I guess it is the norm, but more and more, I’m meeting people with “unusual” work schedules.

This past weekend at the hospital was pretty mellow—busy but not crazy. As usual, I came armed with some breakfast, lunch, and snacks.

When I got home from work, I was really hungry, so I had a sliced apple with cheddar cheese. 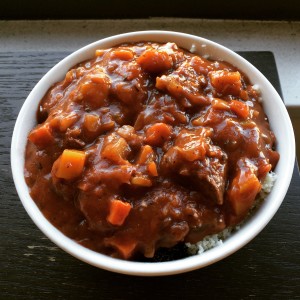 Dinner was a bowl of lamb stew with cauliflower rice over steamed kale. I also had a glass of red wine that was leftover from when I made the stew. By the way, I totally eat real rice and bread and carbs in general, but I enjoy mixing it up with this Paleo-esque stuff once in a while. It’s just a fun change of pace.

I didn’t really get hungry after dinner since it was so filling, but I did have a cup of golden milk before bed that I’d made with coconut milk.

After that it was face plant time so I could get up early to do it all over again.

What did you eat last weekend?