Happy Thursday. Welcome to another Running with Spoons Thinking Out Loud link party, where randomness is the order of the day. Thanks to Amanda for hosting.

Do any of you guys read the New York Times Cooking newsletter? I love it and get so many great ideas. I also love when Sam Sifton talks about music and music to listen to while cooking. Last week he linked to a video of Elvis Costello’s “I Want You” (not sure that’s the exact video but closest I could find) in the context of Valentine’s Day meals and music, and I was just, like, “Thank you!” A few weeks ago, he posted a link to a Conor Oberst song, and it totally made my day. 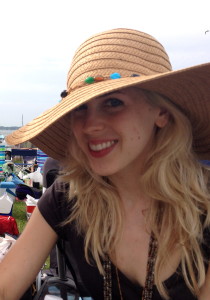 At the Newport Folk Festival

I think some of favorite cooking music is bluesy, rock stuff like early Rolling Stones. It doesn’t get much better than Let It Bleed. That’s one of my desert-island albums right there. It pairs surprisingly well with almost any kind of food or alcohol. I also like putting on something like the Avett Brothers or Spirit Family Reunion for something a little lighter or more…up to date?

This past weekend, I was having a conversation with someone about how I almost always have a song stuck in my head. Then a few days after that, I was introduced to a Spotify Elvis Costello playlist that was like time travel. There were songs on there I’d totally forgotten about that used to be in my head (or headphones, back when I wore them in public) all the time. So it got me thinking of some of the music I’ve been obsessed with over the years. Here’s some music-themed Thinking Out Loud/Throwback Thursday rambling for you…

I totally agree with anyone who says the foundation for your musical taste is laid sometime around age 17. I remember that spring and summer, I listened almost exclusively to Simon & Garfunkel, Weezer, and the Pixies. Then there was Elliott Smith and Death Carb for Cutie and…

* “Just Like A Woman” by Bob Dylan. This song hit a nerve when I first heard it at 18, as I think it must for a lot of girls around that “not a girl, not yet a woman” age.

* What former liberal arts student hasn’t been obsessed with Neutral Milk Hotel’s “In the Aeroplane Over the Sea” at some point? Fun fact: I actually have a BFA in writing. Late in high school, I was trying to decide between nutrition and writing, and a scholarship offer basically decided for me. Little did I know I’d be back where I’d almost started from 5 years after the fact…I feel like I made the right choices.

* Iron and Wine’s “Jezebel” was a song I listened to a lot in college—it had the perfect insomniac lullaby kind of sound. I still think it’s one of the most soothing songs ever. When Eli was a tiny puppy, it was one of the only ways to get him to sleep.

* When I first moved to New York in 2008, Elvis Costello’s “New Amsterdam” got a lot of airplay in my brain, if only for the line, “Though I look right at home, I still feel like an exile.”

* Then I had this weird 4-year period where music fell off the emotional radar, after which I spent a few months in a post-break-up fog listening to 3 albums on rotation: Joni Mitchell’s Blue (because it’s, like, the law of breakups, apparently), The Grateful Dead’s American Beauty, and Spoon’s Transference. No idea why those three, but, if it works, it works.

* Speaking of the Grateful Dead, “Ripple” is one of my most favorite songs ever and I would totally maybe play it at my wedding if I ever got married (even though it’s kind of about death?), but now that I just admitted that to the Internet, I’d probably be too embarrassed.

* One of the songs I overplayed and never got sick of in 2013 was “You Can’t Hurry Love” by the Supremes. I laugh about this now, but there were definitely times listening to it on repeat was the only sure way out of a bad mood. Another big one that year was David Bowie’s “Modern Love.” This might or not be my go-to karaoke song.

* In early 2014, I was totally hung up on this Lumineer’s cover of one of my favorite Talking Heads songs.

* All this aside, if I had to pick just one favorite song ever, it would probably be “Tell Me Why” by Neil Young. It all almost always circles back to this.

What are your favorite songs?