Thinking Out Loud: Farm Freshness and other Things

Some weeks I feel less organized than others when it comes to blogging. Sometimes I remember to give myself a reality check and note that I work full time on a schedule that’s constantly changing. Some Thursdays, all I’ve got for you is a random list of stuff. So:

1.) Lately, I’m obsessed with these Kevita Sparkling Probiotic Drinks. They’re my current favorite pick-me-up treat on the days I work at the hospital. At $2.99 a pop, they’re just that little bit less expensive than my favorite kombucha, which makes me feel justified to buy them several times a week.

2.) A facility I used to volunteer at is closing down, so the other day, my old supervisors rounded up a bunch of former students for a farewell lunch at Sticky Rice, a nearby Thai restaurant. My chili salmon lunchbox was damn good. It was great to catch up with people I used to work with as well as to meet some other nutrition professionals who went through there. 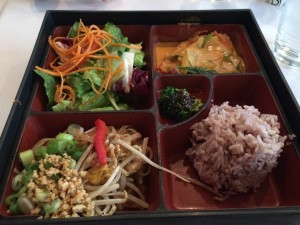 3.) I signed up for a yoga membership at a new place and am loving it. I feel like I finally found my home base.

4.) A couple weeks ago at the ALS clinic, we were playing “Would You Rather” between Alzheimer’s and Parkinson’s Disease. Nothing like a little gallows humor to keep the day moving. I have both conditions in my family, unfortunately, but after much weighing of pros and cons, I decided on Alzheimer’s. That’s not morbid at all. Ugh. I should not have put that out there—the universe is always listening. Ah, well—sooner or later something’s going to get you.

5.) I just got my first shipment from Farmigo yesterday. I’m so excited! 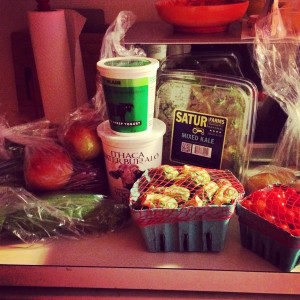 Check out more Running with Spoons Thinking Out Loud link party, where stream-of-consciousness is the name of the game! Thanks to Amanda for hosting!