Happy Thursday. Welcome to this week’s Running with Spoons Thinking Out Loud link party, where stream-of-consciousness is the name of the game! Thanks to Amanda for hosting! 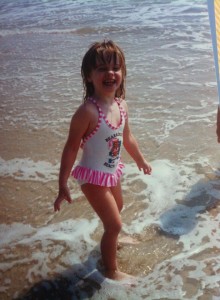 Me, at age 4, before I’d learned to be afraid of the water.

Lately, I’ve been researching and writing about topics related to Pediatric nutrition. I’ve had a great time talking to parents about what their kids love—and hate—to eat and how they encourage healthy eating. I was spoiled growing up in that my mom was a great cook who magically struck a perfect balance between introducing us to new things without forcing them. I don’t remember any dinnertime battles, no bribery. She picked up really well, I guess, on what my sister and I responded to and how to work that into our everyday life. Food was fun without being, like, “Are we having fun yet?”

For this week’s Thinking Out Loud post, I thought it would be fun to revisit some of the foods I loved as a little kid:

*Oatmeal—My mom used to serve rolled oats and make little wells in the surface, into which she’d pour milk and then drizzle maple syrup over the whole thing. I loved watching the milk and syrup swirl around and make cool patterns.

*”Rampion”—Aka salad. My sister and I were obsessed with this Rapunzel cartoon. In the beginning of the movie, Rapunzel’s mom was asking her husband to go harvest some rampion to satisfy a pregnancy craving (folate was important even in the dark ages or whenever that story takes place).  My sister and I constantly asked for rampion, so every possible leafy green was given this new name. Worked every time.

*Mac and cheese from the blue box—For the once-a-year craving, Kraft is still the only thing that’ll do. I just add green veggies or serve with a salad and use olive oil instead of margarine or whatever the “classic” prep is. I’ve learned from talking to parents that mac & cheese is basically a vehicle for other, healthier foods, but my mom denies ever pureeing cauliflower or squash in there. She says she trusted us to eat veggies in their native form.

*Broccoli—They were like little trees. How cool is that? As a Sagittarius, I think I appreciated the no-bullshit factor in being served non-mystified produce.

*Yogurt—We used to pour it in a bowl and make faces out of sliced fruit. Or maybe we only did that a few times and it just really sticks out in my memory. Either way, I remember eating a lot of yogurt as a kid.

*Banana Baby Food—I used to beg my mom for this crap, even after my sister was eating all solids. She eventually found a way to phase it out, I guess.

*Kix Cereal—I always wanted to string garlands of it like on TV, but my mom somehow convinced me to eat it instead.

*Black Raspberry Ice Cream from Carvel—This stuff was the bomb back in the day. Why I ever went over to the soft-serve/fro-yo dark side for so many years (1990-2010-ish) should be beyond my scope of comprehension, except I totally blame the fat phobia that reigned during that time. I had a friend with a “cool mom” who used to serve us fat-free cheese and all other manner of fake foods, and it took me a few years to realize there was nothing cool about that.

What were your favorite foods when you were a kid?