The Thin Side of Annoying Advertising to Women 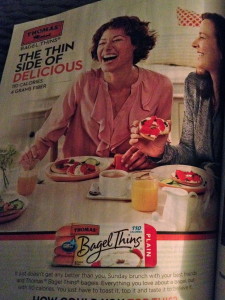 The other night I woke up around 2 and couldn’t get back to sleep, so I put on my glasses and pulled a magazine into bed. Because my glasses are the wrong prescription, I didn’t even notice the text at the bottom until the next morning, so I found myself awake and obsessed with wanting to know what is going on this picture. At first I thought it was two women having breakfast in their pajamas and was, like, “Oh cool—a lesbian couple enjoying a lazy breakfast at home together? How progressive!” But why is one of them laughing like she’s in pain? Then I noticed they were not in PJS. So maybe these women are at work? Oh, no, that looks like a cute window-seat in the background, so it’s at someone’s home. Then I saw the third plate. There has to be a third (at least) because two women having breakfast at home together is just too much for 2014 mainstream advertising, apparently.

So of course I assumed brunch, and an email invitation:

“Hey ladies, here comes the sun…So—I just bought a box of these Bagel Thins. Guess you could say I’m feeling kind of fat and curious after this long, heteronormative winter couped up with my husband and kids in this spotless house. Is it just me or is keeping the whites white exhausting? Anyway, brunch at my place? This month’s theme will be Nothing Over 150 Calories. I don’t know about you, but I need to lose at least 10 pounds before even trying on last year’s tankini.”

Anyway, to Thomas’ credit, they explain the brunch scenario at the bottom of the page, so my wonderment and rambling is somewhat unwarranted. Also, I have nothing against tankinis, if they’re even a thing anymore. I was just sleep-deprived and cranky.

Still, I’m annoyed by the forced-looking laughter. Why do women always have to be laughing in food ads? Food and eating it with your friends can be fun, but this looks more, “I’m dying inside because 110 calories cannot fill the void but maybe if I fake it I will start to feel satisfied with less because I am a woman and that’s what we’re supposed to do and I don’t want anyone to think there’s something wrong with me…”

I know I’m being a bit hyperbolic, but it’s been one of those weeks. At least this is a step up from women laughing alone with salad. I’m not asking for a “serious” Bagel Thin brunch or anything like Sex Toy Party Brunch at which Bagel Thins happen to be served, but come on. I wonder what a Bagel Thin ad would look like if it were being marketed to the male of the species…

What do you think of this ad? Advertising geared towards women in general? Describe a Bagel Thins for Bros ad.