One of the first things I tell people who ask about “eating healthy” is to fill half their plate with vegetables, a quarter with grain, and a quarter with protein.

After so many years of doing this myself, I find it’s sort of automatic for me, though that’s also because I’m an avid vegetable lover. I’ve been known to choose entrees based on what vegetables are served with the item. Steamed broccoli or roasted root vegetables? I’m in.

Yesterday we went out to New Jersey for my cousin’s Communion party, which was held at the same place we went for Easter brunch. From working in a country club in college, I always assume the worst when it comes to vegetarian and pescetarian items, so when faced with a buffet, I instinctively load up on the veggies.

I kind of laughed when I sat down to eat yesterday (I was starving, as I’d been up since early and gone to a hotter-than-usual hot yoga class) because go figure—my plate had quite a lot of green stuff on it. 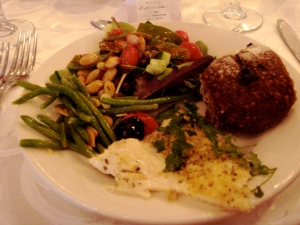 They also had ice cream sundae fixings and cookies for dessert. I forgot to take a picture, but as I’m sure you know, I almost always say yes to that.

In other green stuff news, I took my green smoothie & cereal thing to a whole new level of weirdness the other day, while recovering from a lovely case of food poisoning. Because I was still a little afraid to eat anything too bulky, I made one of these for lunch, using half a banana, half an avocado, a vanilla soy probiotic yogurt, a handful of spinach, and protein powder.

I can see why raw food chefs use avocado to mimic the texture of ice cream and other creamy desserts—I ended up with this interesting green pudding. I added the cereal to test out whether I was ready for solid food. It definitely doesn’t score any points for attractiveness, but it was a good way to have a balanced meal without, um, overtaxing my system. It also tasted pretty good. Hopefully I won’t have to make this again for any unpleasant reasons, but at least I have something to recommend to someone who might.