So…Mayor Bloomberg ordered an evacuation of low-lying areas, the MTA is shutting down at noon tomorrow, and I just got a call from the company that owns my building telling me to “get out now.” Awesome. For the record, I don’t live in the zone undergoing a mandatory evacuation, but I’m still weighing the option of getting out of the city for a few days, especially since I don’t have anything I can’t do from somewhere else.

I would not say I’m the image of calm, exactly, but I think I’m doing pretty well, considering my genetic predisposition to freak-outs.  I have a plan and a packed suitcase though I haven’t 100% decided yet exactly what version of that plan I’ll implement. It would be easier if Chris and I were on the same page, but he’s concerned about getting to work and school on Monday.

In the meantime, I’m making it my job to incorporate as many perishable goods into my meals and snacks as possible today.

This photo was taken after I was 2/3 of the way done with this giant salad. 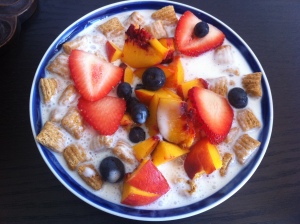 Cereal with kefir and fruit

So we’ll see what I end up doing. I’m glad I at least packed my suitcase and bought bus tickets—this way I can put off my decision as late as possible. If you’re in the city or concerned about someone who is, here’s a map of evacuation zones in the NYC area. Be safe, guys!

Have you ever been in a hurricane? New Yorkers—what’s your plan for the weekend?