I was shocked when I woke up and still had lights this morning. I know New Yorkers like to act all cavalier about sh!t but this storm has been pretty scary. I think the scariest part is how much worse it was in other places—it was an odd sensation, acknowledging my own fear but knowing that I had it a lot better than folks in other parts of the city and other parts of the east coast.

I will admit, though,  the wind was really scary last night. I live pretty high up, and  one of my walls is basically all window. Most of the time, this is awesome, but not when there’s, like, 90 mph winds. After seeing that a bunch of my neighbors had taped their windows, I did the same, but I was still really nervous, listening to the glass groan. Since I knew I had to be at the hospital the next day and wanted to get some decent shut-eye, I finally did something silly but brilliant… 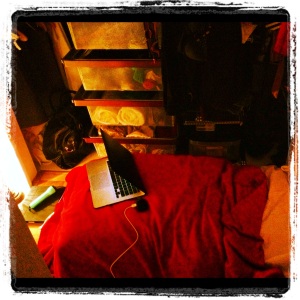 Yeah…I totally made a nest in my closet and slept in it. I have to admit, it was some of the best sleep I’ve had recently! And I ended up needing it…after serving breakfast to staff, I was reassigned to clinical today.  My whole body feels like I worked out like a crazy person all day.

Tomorrow is going to be another adventure, I’m sure. I’ve been told that I may be called in to do some foodservice stuff starting at 6:30 a.m. It is what it is, though! Hope everyone is staying safe!