I love when NYC does Restaurant Week. I rarely go to the places participating, and if I do, I almost always talk myself out of ordering the $35 3-course tasting. In a lot of places, you’re not getting much of a value. I know that sounds very American of me, but when you’re not exactly rolling in money, $35 is still a lot to spend on a meal, and nothing is worse than going home feeling like you’ve been had.

Last night, however,  was a great example of the opposite experience.  I met up with a few friends at Sushi Samba in the West Village, which serves a fusion of Japanese, Brazilian and Peruvian food. Kind of an odd mix, but it translated to a really interesting mix of flavors. Since the menu items were a bit pricey, most of us went with the Restaurant Week Menu. 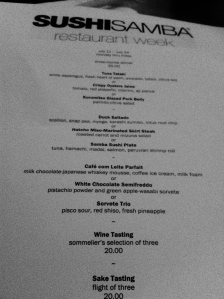 For my appetizer, I ordered the Tuna Tataki, which was fantastic. The slices of tuna were so fresh, and the dressing on the greens was outstanding.

The porkbelly Anna ordered looked great too. Minerva had the oysters appetizer, which was so cool-looking, but the photo I took came out all blurry and dark. 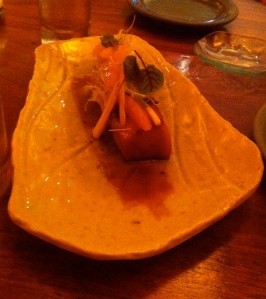 I had serious salad envy when I saw Natalie’s plate. The greens with the raw beets and other awesomeness was not on the Restaurant Week menu, but if I end up going back here, I’m making a point of ordering it.

For our main course, all three of us Restaurant Week-ers got the sushi, plate, which featured a Peruvian shrimp roll (basically shrimp tempura with lettuce and some kind of corn sauce) along with a few pieces of fish. I ended up leaving a little because I knew dessert was coming.

The last thing up was a refreshing trio of sorbets. I rarely order sorbet in restaurants anymore because they’re often so sweet, but on a steamy summer night, they’re so much more appealing than a creamy parfait or cake. For variety’s sake, Anna ordered one of the other options, but no one was really digging it.

Shockingly, we didn’t order wine, but I don’t think any of us were feeling it. Sometimes, it’s just too hot to drink. I never thought I’d say that, but I just did. I’d thought my appetite was all wonky because I’m depressed or something about having a f*$ked up foot, but maybe it’s just the weather!

I had such an awesome time last night, I feel energized and ready to tackle the small mountain of work waiting for me. I love being able to do most of my job(s) from home, but there are productive days, and there are days where you kind of drag your proverbial feet.

It’s supposed to get up into the mid-90’s today. I love the heat, but days like these make me really happy to have a free gym in my building.