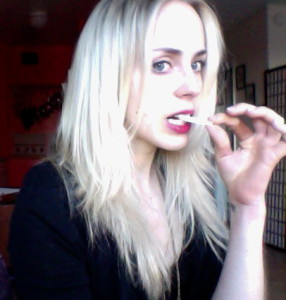 Nope, not giving up gum for Lent.

Given that the season of Lent is upon us, let’s talk about everyone’s favorite aspect of Catholicism: GUILT.

For the record, Sister Bea should totally have just played us this song and spared herself the hassle of giving a chastity talk to a bunch of thirteen-year-olds. “Why buy the cow” is way more effective than “…because God said so,” but I’m getting away from myself here.

Lately, I find myself struck by the amount of negative self-talk I hear from clients, patients, and even kicking around in my own brain. I should do this; I shouldn’t do that; I know this is terrible, but…

As someone who encourages self-love, it’s probably no stretch to hear me say I am not a believer in Cruel-to-be-Kind (unless we’re talking Nick Lowe). “I criticize because I care” is a slippery slope. There is a huge difference between constructive criticism and being a dick. We’re bombarded on a daily basis with things we should feel bad about, and it hurts me to hear wonderful, kind, brilliant people beating themselves up for things while ignoring all the amazing things they do every day. Food should not be one of those things. We’ve got too much other s*** to sort through.

Think about all the energy-sucking time we waste feeling bad about ourselves—now think of what your day might be like if you had positive thoughts and feelings boosting you up! Of course, it’s completely natural to experience negative thoughts that serve no purpose other than to make us feel crap. When you catch those little word bubbles popping up, acknowledge them and turn the thoughts into something positive.

I think some of my on-the-go gals will appreciate this example: When you hear yourself thinking, “OMG I can’t believe I didn’t have breakfast until 10:30! I know you’re supposed to eat an elaborate bowl of superfood oatmeal with lots of seeds or a unicorn colostrum smoothie within an hour of waking, but all I was able to get around to was a hard-boiled egg between meetings, which is so terrible because…”

Turn it around and say, “Dude, I actually ate breakfast today. Go me!”

Another example, for those out there with Lenten resolutions, instead of looking at Lent as a time in which to “give something up,” you could also look at it as an opportunity to test-drive a new good habit. 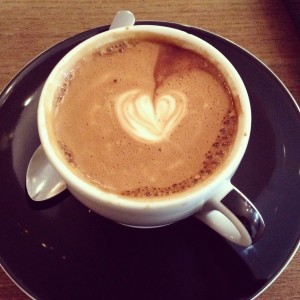 I didn’t give up coffee either.

So, this month, while we’re encouraged to focus on denial and avoiding temptation,  challenge yourself to pick something to feel good about each day (food-related or not). Give yourself credit for a job well done!

I’ll go first: I’m so glad I packed breakfast and lunch to enjoy at work today. Now I get to use my lunch break for a walk in the balmy weather instead of hunting for takeout!*

Somewhere, Sister Bea is probably turning in her grave because I have managed to bastardize the religion she tried to teach me, but I’m a dietitian, not a nun. What matters is you the do your personal best.

Did you give anything up for Lent? What do you feel good about today?

*Let’s ignore that a high of 51 degrees is not particularly balmy, but like I said yesterday, if it’s above freezing, I’m excited.