So it’s a few days out and overall, I still have mostly good things to say about the new ChooseMyPlate symbol, which has replaced the Food Pyramid. There are a few things, though, that could be more clear. 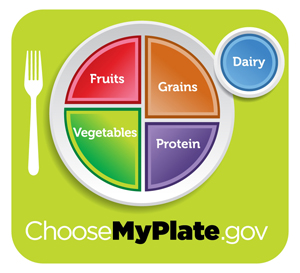 I think it’s clean-looking, much more easy to understand. It doesn’t overwhelm you at first glance, which is really important. I also think the way the plate is portioned out is great—that fruits and vegetables account for one full side hopefully will help encourage people to eat more of them. I think it’s also an effective way to illustrate that, on average, we really don’t need to go overboard on protein, as has been the trend for many years in the US. I also appreciate that it says “protein” instead of “meat” and “grains” instead of “carbohydrate.”

To be honest, I don’t love that the little circle on the side says “dairy.” There are many people who cannot or choose not to consume dairy, and I think that should have been taken into consideration. I did like the old “dairy or milk equivalent,” but I suppose I can see that being too wordy. The website could have more to say on non-dairy sources of calcium, at least, but I haven’t seen much there. Fortified soy milk is only one of many. As the USDA spent $2 million developing the Plate, this is likely a choice (perhaps related to industry influence) and not merely an oversight.

It’s also curious to me that fats and oils were not included. On the one hand, this is somewhat appropriate, given that Americans, on average, consume more than we need. However, we do need some. How hard would it have been to include a little salad-dressing cup on the side?

I suppose the biggest variable is whether people will actually take the time to look at the plate or visit the Choose My Plate website. I think schools also have a big role to play in educating children on how to make healthy choices. I mean, the design is just begging to be used for an in-class drawing exercise!