Before we actually get into this post, sorry for any tech/subscription issues with the blog since the recent redesign. If you want to subscribe, I re-added a box where you can enter your email to get posts sent to you. As always, you can also follow me on Twitter, Facebook, and now Tumblr.

1.) Daylight Savings seems really early this year. I will take it.

2.) Last night as I was leisurely catching up on blogs after my shift at the hospital, it seemed that every post was about pregnancy: morning sickness, cravings, meals plans…what is in the blog water? Congratulations, guys—have fun.

3.) Also weird: Groupon has started sending me deals for Medieval Times, botox, and kid-friendly events. What’s next, discounted rounds of IVF? Seriously, Internet, you have more interesting things to focus on besides the hypothetical future contents of my (empty) uterus. If you’re trying to make me feel old, I will get you back by bringing up AOL chat rooms of yore.

4.) The other night I caught up Anders, with one of my oldest friends here in NYC, over dinner at Cara Mia in Hells Kitchen.  My calamari & shrimp in spicy tomato sauce (and that glass of Chianti) hit the spot. If you’re looking for a good pre or post-theatre bite (or just some solid Italian food that won’t break the bank), I highly recommend it. I haven’t lived in Hells Kitchen for a few years, but I still go back for the food. This place never disappoints. 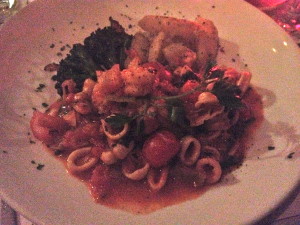 5.) WonderBerry. Um, wow. This was an intense frozen yogurt experience, even without all the crazy lights and screaming kids in places like 16 Handles (best birth control ever). Weirdly enough, I’d had a twice-a-year fro-yo craving a few days earlier, so I didn’t argue when Anders suggested finding a spot after dinner. Thanks, Yelp. Craving satisfied. It tasted good, but I think that craving has been dialed down to a once-a-year event. How is it that I used to basically live on this stuff? The rest of the night, it felt like my stomach was standing with its arms crossed, like, “Jess, wtf? That was not food.” Live and learn. Maybe I am getting old.

6.) WonderBerry—continued: I wouldn’t call these things food either. In Anders’ words, “What in the actual f*** is that?” Very good question. Apparently they’re something called “Juice Poppers.” Whatever that means… 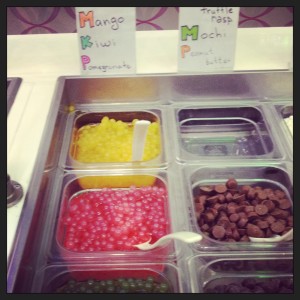 7.) More on the frozen foods front: I am still not over this smoothie. In the past week, I’ve made it 4 times. I thought about adding mint extract, but turns out mine would have been “Best By August 18, 2012.” Whoops. Yeah, not gonna mess around with that…Let the spring cleaning commence.

What’s on your mind this Sunday? Do you like frozen yogurt?