Last night I ventured to Hoboken to celebrate one of my oldest friend’s birthdays. I can’t believe I’ve known Amanda for almost 20 years! Geez—that’s making me feel a little bit old…

It was supposed to be a surprise, so a bunch of us went to Ali’s place to wait for the birthday girl to arrive. In true bachelor fashion, everything in the fridge was liquid. I was also amused to see a bottle of canola oil mistakenly placed amongst the hard stuff.

I’m not sure we pulled off the surprise part, but it was fun nonetheless. Eventually, we walked to a bar called The Shannon, which quickly filled up with unironic New Jersey stereotypes. Holy sh*t, I was so out of my element, but it was pretty hysterical. Hanging out with my friends and watching people act like morons is always entertaining. But man, what was I thinking, wearing a little sundress with tall Frye boots? I forgot that that translates to “Talk to me” in Guy Language. I also seem to have forgotten over the course of the summer just how many things “Nice boots” is slang for. Haha to be fair, my nickname in college was Jess in Boots, so I should know better ; )

Also, when I ordered a club soda (I’d had a generous glass of wine beforehand), the bartender looked at me funny and said, “Just club soda?!” 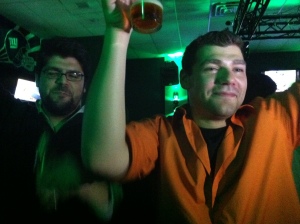 Yep. My taste buds could have had another drink, but being wasted on the PATH train home would not have been fun. I have a feeling the guy standing between the train cars, taking a piss while the damn train was moving has a different outlook on life. The conductor was not happy (apparently that’s a $45 ticket)…Lemor and I were amused, though.

Even though I didn’t drink much, I still woke up feeling exhausted (thanks, hormones) and out of it. Maybe it was all the walking we did? A rescue bowl of oatmeal was a must for breakfast. Belly-dancing class was really fun today, but it’s been hard to get motivated to do any work since I got home. At least I did laundry and cleaned…