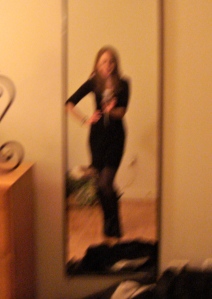 We all have things about ourselves that, um, stand out. For example, though I have tininess genes on both sides of the family, I also inherited the Greek/Turkish ass that comes with the territory. Even when I’m a little too thin, I still have hips and a butt—and I’d never change it. At 4’11” and a BMI on the low end of normal, anything that keeps me from looking like a little kid is a bonus.

Studying and working in nutrition, I’m surprised that the topic of body image doesn’t come up more often amongst my peers. It almost feels like we avoid it sometimes, or try to intellectualize it. I, for one, resent the media’s not-so-subtle pressure on women to be unhappy with our appearance. Why should we want to alter our natural shape, the things that hint at who we are and where we come from? I get annoyed when I feel like one of the only people I know who’s not trying to make themselves smaller.

And hey, sometimes having a big ass can be an advantage! I actually had a conversation with my sister the other day about times our butts have saved our lives. Her story involved skiing into a tree, and while mine was a little less exciting—let’s just say this winter has involved my falling more than once in public—we agreed that a little extra padding can be very protective.

Yes, falling in front of other people is still embarrassing and a little scary (if you, like me, have a huge imagination that jumps to all kinds of worst-case scenarios), but getting up and walking away unharmed is a plus. I’m surprised and impressed by my lack of bruises…

So do yourself a favor this week and don’t hate on your butt—or whatever it is that makes you you! I know it sounds silly sometimes to say stuff like that, but we all could use a little reminder now and then.