After a few hilariously bad attempts, I decided that seitan, like cakes that do not fall down in the center, is just one of those things I will never be good at making. Then I read about seitan logs on Hungy, Hungry Hippie and thought, “Hm. I never thought about a seitan log before.” I stroked my invisible fake mustache and said, “It just might be crazy enough to work.” And then I started singing the Ren & Stimpy log song in my head because once it’s stuck, it’s stuck.

Apparently this seitan log thing has been around for a long time and I’m just late to the party. After scouring the interweb, I put together this recipe, which was based on several I saw out there, which all seemed to point here. 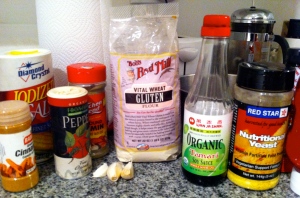 As you can see, my rogue log could not be contained by the foil, but that’s because I messed up one of the ends as I was wrapping. Oh well, there are worse things in life. Next time I’ll be more careful.

We served slices the log with Zatarain’s Jumbalaya and leftover kale. While the Zatarain’s stuff has a few weird items on the ingredients list, once in a while it’s not that big a deal. While the sodium count is a little high for my preferences at 500 mg per serving, in the context of a day that contains mostly foods that are low in sodium, it’s not so bad. The way I tell people that one sweet thing a day is usually okay, sticking to one salty item tends to balance out. 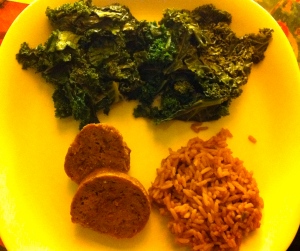 Ill get presentation down next time

So how did it taste? Freaking awesome. It may look a little like vegetarian haggis, to use Chris’ description, but even he, the most honest critic I know, considered it a success and started brainstorming a bunch of ideas for future versions. He actually went back for seconds. I think this is going to become a regular thing. It sure beats buying the pre-made stuff.