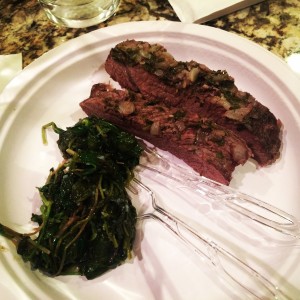 Some grandmothers are great cooks, and some are great at other things. My paternal grandmother was known more for her sense of humor, cigarette smoking, and solitaire-playing than she was for her cooking. My dad says the first time he ever tried “real” mashed potatoes (as in, not from a box) was when he was dating my mother. There were a few food-things my grandma did really well, though, and one of them was her traditional Greek lamb.

My mom has kept the custom alive, often serving leg of lamb on Christmas Eve, Easter, and other special occasions. For a recent cooking class we co-taught, I tweaked my grandmother’s recipe slightly to make it a bit lower in calories and using all olive oil instead of a mix of oil and butter. The end result is a lamb that’s flavorful and filling without being over the top. My favorite way to enjoy it is with a side of greens cooked with lots of garlic and topped off with a generous squeeze of lemon.

*note:  lamb chops can be substituted, but cooking time is much shorter.

In a saucepan, heat the olive oil, then add the onion and cook until translucent without browning.  Add garlic and cook until fragrant (about 30 seconds) then add parsley, oregano and lemon.  Simmer for a few minutes until parsley is wilted and oregano is infused into the mixture.

Slather half of the parsley/oregano mixture inside the cavity then tie and secure with the cooking twine. Rub outside with a little olive oil and salt and pepper.

Put the lamb into a roasting pan. It is not necessary to use a rack.  Take 1/2 of the remaining mixture and dab on top with a spoon and spread it all over the top and a bit on the sides.  Add the other 1/2 of the parsley oregano mixture one half-hour later.

Does your family have any traditional recipes?