April always makes me want to listen to Bob Dylan’s Highway 61 Revisited. I think it’s something to do with a musical flashback to my first year of college, that fresh-air feeling of Boston after a long, dark winter. It was still cold as s*** but it smelled like spring. There were cherry blossoms outside my window and I still had the stamina to pull all-nighters listening to music and writing and go to class the next day like it was the most normal thing to subsist on no sleep. Hah! Now I feel like death with a swipe of eyeliner if I get less than seven hours.

I had a time times to kill after getting everything organized for Tuesday’s event in New Jersey, so I started unpacking boxes of old clothes at my parents’  house to separate things to give away.  I sniffed this one scarf I used to wear almost every day back in March/April/May of 2005 and since then, the song “Queen Jane, Approximately” has been stuck in my head.

The next morning, I made myself take a weekend day (or at least try), since I’d been going at full speed for a bit too long and have some busy weeks at the hospital coming up. After a refreshing hot yoga class, I took a few minutes to pick another recipe for my April Cookbook Challenge. Cheers to not forgetting three weeks in a row! 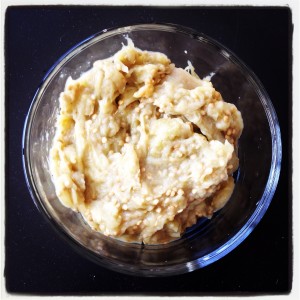 This go-around it was eggplant caviar from Alice Water’s The Art of Simple Food.  If I’m remembering right, this book was a Christmas gift from my mother back in 2008 or 2009. Of course, instead of actually following the recipe, I just followed the first and last few steps (roast & scoop eggplant, mix in olive oil). I completely side-stepped the minced garlic and fresh parsley on top, going instead with the Garlic Gold infused olive oil I got for Christmas this year because, well, why not? Culinary spring cleaning, what up? Eggplant Caviar, approximately.

Ingredients:
1 eggplant
salt + pepper
2-3 tsp garlic-infused olive oil
Directions:
This is great on toast, but I also mixed some into a cauliflower rice stir-fry and loved it that way. It’s also great tucked into an omelet. Who are we kidding, though—I could eat this from the bowl with a spoon. I think this recipe is going to be added to the regular rotation. This may or may not mean I just buy an extra eggplant every week instead of allowing this to replace the roasted slices I enjoy in salads, stir-fry, and on toast. I have no idea how or why I’m such an eggplant freak, but it’s the number one reason I could never follow a macrobiotic diet. I love me some nightshades, what can I say?
What foods can you not get enough of?