I feel like I’ve been seeing a lot in the media lately on the role men’s health plays in children’s genetics and health. It’s about time. While I can’t say I’d bring it up on a first or third date (at least not on purpose), it’s an important conversation, and I’m glad to see it brought more prominently into the public sphere. This article from this week’s New York Times Sunday Review section by Judith Shulevitz discusses some of the current research.

For so long, the focus has been on how women can help or hurt the in-utero development of their children (Annie Murphy Paul’s Origins  is one of my favorite books on how we’re shaped before birth), while men have been free to do whatever they damn well please without the nagging concern of “Gee, I wonder how this could effect the kids I’m going to have one day.”

I’m being slightly hyperbolic, of course, but I feel it’s far more common for women in their twenties, for example, to say they’d like to have children by age 35 to reduce the risk of various birth defects than it is for a 25-year-old dude to say they want to procreate before 50 in order to reduce the risk of autism, schizophrenia, bipolar disorder or any of the other conditions being linked to older fathers. 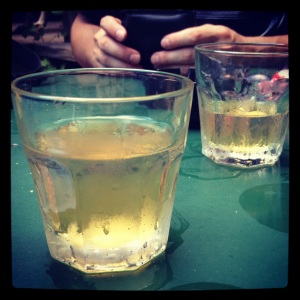 I have plenty of female friends who aren’t even in relationships or planning to have children anytime soon who are taking prenatal vitamins, quitting smoking, and cleaning up their diets to prepare for whenever their personal “someday” becomes present-day. On the flip side, I know a lot of men who smoke and drink excessively on the regular, boasting about their copious bacon consumption and (outwardly, at least) appearing cavalier about a potentially shortened lifespan.

From an early age, women are conditioned to think of are body as not just our own vessel of existence and experience but also as a home/greenhouse/oven/whatever you want to call it for another life. There’s a sense of responsibility that comes with that. I’m not saying it’s inappropriate—on the contrary. What I find inappropriate is the way that men have not been expected to exhibit the same kind of responsibility in caring for themselves so they can eventually care for someone else.

I’m not saying we should all become sober vegetarians or anything, but what we should do is use the information we have to help us make decisions that will benefit our own health and—if it’s in the cards/part of the bigger picture—the health of our children. It’s never too early or too late to adopt a healthy habit.

What are some healthy habits you’d like to see more men (or women) pick up? Any guy commenters out there—how does the idea of children factor in to your health?