When I was a kid, the day after Christmas was always kind of a bummer, but now I actually look forward to it, if only for the awesome sales. The past few years, I was traveling on December 26th, so this year, I had an especially nice time returning gifts and shopping with my mom and sister.

I made out like a bandit at JCrew and Victoria’s Secret. I scored an awesome pair of jeans, some tights and an array of unmentionables. There’s no kind of instant upgrade like a good bra. I have to admit, though, I was a little troubled by some of the PINK collection at VS—to paraphrase my friend Allie, what’s with the fratboy fantasy thing? Maybe I’m just showing my age a little, but I feel like I missed something… 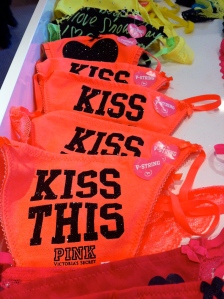 Can someone explain this one to me?

Later in the day, I went to Bed Bath & Beyond to spend some gift cards on apartment essentials. I was able to get a coffee maker, food processor, some bathroom things (is it weird that I find a new shower curtain so satisfying?) and a few pots & pans.

For dinner, we had more leftovers. Yesterday’s shrimp cocktail became a pasta dish, which was eaten alongside some roasted root vegetables, spinach, and potatoes. 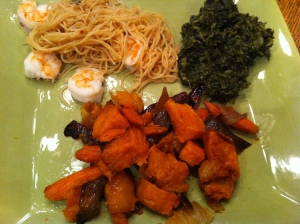 I’ve had a really nice visit with my family, but I’m looking forward to getting back to NYC and cleaning and getting my apartment in order. In a few weeks I’ll have a couch again and maybe even a TV. After a few months of things being in flux, I’m overdue for some nest-feathering. Let’s pretend that’s a legit term.

Do you hit up after-Christmas sales?