Yesterday, I met my sister for lunch at Sacred Chow, a vegan restaurant in the Village. We selected a few things from their small plates menu, and of course, had to take stuff home because the plates were not as small as we’d imagined. Whoops. At least I know what I’m having for lunch today. I ordered the curried steamed broccoli, roasted curried cauliflower, and the roasted Indonesian tempeh, which came with a side salad. I guess it’s safe to say I like roasted, curried things. 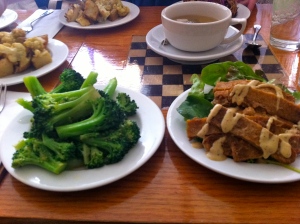 A lot of vegetarian restaurants serve what is so lovingly referred to as “fake meat.” In my first Nutrition & Food Science class, we learned to call it “analog protein,” but that sounds just as if not more creepy. Another term, which I happen to think holds the middle ground pretty well, is “plant protein.”

Fake meat products such as boca burgers, fake chicken, soy ribs and the like were helpful for me when I was first living with Chris and getting used to eating less meat—I consider them good “transition” foods for anyone looking towards a more plant-based diet. Over time, though (aka as I learned how to cook rather than just microwave and stir), I came to prefer less processed sources of protein such as beans, lentils, nuts, tofu, tempeh, and seitan.

Speaking of seitan, Chris has really gotten into the seitan log thing. Last night while I caught up on writing and reading, he whipped up a spicy sesame seitan dish that kicked the ass of the Sesame “Beef” at most vegetarian restaurants I’ve been to. I think it’s the addition of the vinegar and red miso paste and the fact that he cooked it for 1 hour and 45 minutes at 300 instead of 90 minutes at 325. He says he’s working on cracking the fake meat code, and I have to admit, I think he nailed it with this one. 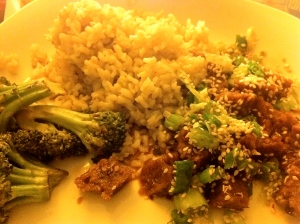 Not the best picture, but I tried

One definite perk to making your own plant protein items is that you know exactly what goes into them and don’t have to worry about trying to pronounce all the weird chemicals in them. It’s also fun to play mad scientist and work with the flavors until you get exactly what you want. It’s harder to do that with a frozen patty.

Later today, I’m going to hot yoga with my mom and my aunt and then headed out to Jersey for a little Eastertime festivities (and listening to “Just Like Tom Thumb’s Blues,” as it’s raining and Eastertime and I can’t help being a Bob Dylan nerd). This year it’s going to be dinner at my grandfather’s country club again. As I always say, it’s a cultural study, if nothing else. At least the food is pretty decent.

Hope you have something nice planned this weekend!