So I have to say, I’m pleasantly surprised that I’ve managed to stick with this cookbook challenge all month so far. For this week, I made an egg and cheese omelet (Menemen) from Vegetarian Dishes from Across the Middle East by Arto der Haroutunian. There were a lot of dishes I wanted to make from this book and marked for future reference, but I was trying to use up some ingredients I had in the fridge, so this stuck out to me right away. 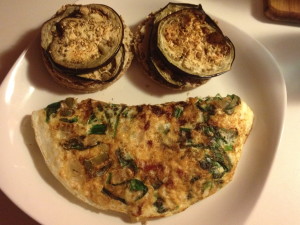 The book said to pair with salad and pita, but since I’d already made salad that day and had no pita, I used an Ezekiel English muffin—haven’t bought those in ages, but it was a nice treat. Great vehicle for baba ghanoush and roasted eggplant slices. Can’t say I earn any points for presentation, but it kind of resembles a smiley face so I’m hoping that counts for something! The wide “eyes” make it look kind of a deranged smiley face, though, so let’s just say I am never going to be a food stylist.

This was the only all-vegetarian book I’ve made something from so far, mostly because the recipes are delicious regardless of whether you eat meat or not. Also, I could eat Middle Eastern food every day and not get sick of it.

Here’s what my loose interpretation of the recipe ended up looking  like:

In short, I’m happy that I managed to cook something new each week so far this month, even if I didn’t do anything too ambitious:

I haven’t decided yet what I’ll make next week—part of me would like to undertake something a little more involved, but we’ll have to see…

What do you make when you’re trying to clean out the fridge?