I don’t know about anyone else, but April seemed to fly by. 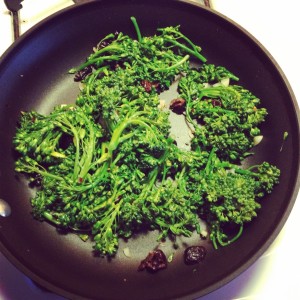 To be honest, I’m actually surprised I managed to make a new recipe each week, despite a packed schedule. Part of this is likely due to the fact that cooking is one of my favorite forms of therapy and procrastination. I also chose pretty user-friends recipes. Choosing vegetable side dishes also made it easy for me to use those foods into multiple dishes instead of having to eat the same meal every night. To recap, I also made:

For my last April Cookbook Challenge dish, I went with something from the same book I used in week one, Mary Ann Esposito’s Ciao Italia: Five-Ingredient Favorites. I made the Rapini con Olive—broccoli raab with black olives, garlic, and red pepper flakes. I do have to admit that I used broccolini, as I couldn’t find broccoli raab at the store, but it was still wonderful!

The night I made it, I served it over red quinuoa with shrimp, roasted red pepper, green cauliflower, and  zucchini coins (also from this cookbook), and a little parm. It was so good—definitely making this again! A more obvious pairing choice would be pasta, but I was out. 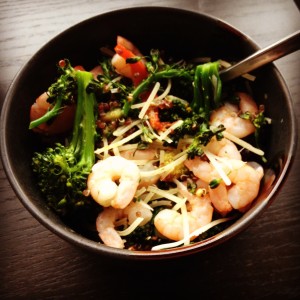 Just a note: this also happens to be really good with a poached egg instead of shrimp for those of you (like me) who will put a poached egg on practically anything.

Have you ever done a cooking challenge? What were some of the best things you ate in April?