Sunday again. It’s dreary here in New York with a little high-anxiety energy thrown in around the weather, so all the more reason for my weekly gratitude-list post.

*First off: I want to take a second to wish a Happy Birthday weekend to my sister—yesterday was the big day. I was lucky enough to get to see her and the rest of the fam (fur children included) twice over the past week. I was out there again Thursday, and enjoyed a lovely late breakfast with the birthday girl on Friday morning at an adorable local cafe. It was so nice to start the day with girl talk and a non-desk breakfast for a change! 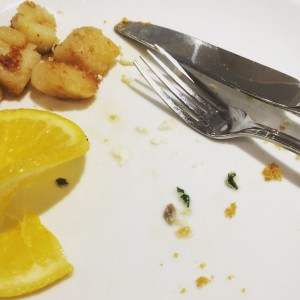 (clearly, I hated my florentine omelet)

*Part of the reason for my second trip: I had to go to my eye doctor—I’m in the process of transitioning to a new contact lens brand and Rx, and it’s been a bit of a process. Accepting that my eyes have gotten worse this year after a long time of no changes was tough, but I got new lenses, and I can read signs again! I had no idea how much signage I’d been missing out on.

*Disney Princesses Reimagined as Hot Dogs. Yes, this is a thing, and it is wonderful.

Which Disney Princess did you identify with, growing up? I think Ariel from the Little Mermaid would have to be my vote—always going off exploring, longing to be part of the big world…collecting random objects was totally something I did when I was little too.

*This post from the Kitchn on their instant oatmeal taste test was awesome. As the weather cools down, I’ve been craving hearty grain-based breakfasts, and I could stand to try some new-to-me brands.

*I know it’s barely October, but I couldn’t resist using a discount code to buy some super-cute wintery leggings from White Plum. I got these.

*On my work-from-home days (and nights) I’ve been binge-watching 30 Rock, since I never saw the beginning of the series. By binge “watch” I basically mean having it on in the background. That’s about as close as I’ll probably ever get to being able to watch TV. Still. It’s so good! Not-so-guilty pleasure. Tina Fey is my hero. And Liz Lemon might be my spirit animal?

*It probably says something about me that I routinely burn my mouth on coffee and hot soup, but hey. Pros and cons of being a fire sign. Sagittarius with Sagittarius rising = basically f***ed in the patience/heat-sensitivity department.

*Speaking of soup, I’m looking forward to making some soon. I’m thinking red lentil & apple with caramelized onion and kabocha squash, since I still have a gazillion apples to use up…

Have a great Sunday!

What’s on your list of small, good things this week?