A Small Collection of Joyous Things

Happy Sunday! Hope you’ve been having a great week. Every Sunday, I like to take a second to hit the Pause button and take stock of the small good things from the past seven days.

Mercury retrograde, which is going to continue until October 25th, can be a real pain in the ass because it screws with communication, technology, and travel. You might find it hard to make—and-keep plans because things keep coming up you need to address or be flexible about. However, there can be an upside to this.  In fact, it’s actually worked in my favor a few times this week. For example:

*Wednesday night I was supposed to go to a cooking class with a colleague. It got canceled at the last minute, and all the participants were told we’d be getting a refund. A couple of us girls popped into a nearby cafe for a much-needed glass of wine. Taking a chance in the middle of the workweek to gab about work, boys, and the Future was exactly what I needed.

*Thursday night I went to a much-needed yoga class and ran into a friend there. It was so nice to see her!

*First things first: There is nothing like a nice, warm bowl of oatmeal in the fall. This concoction had pumpkin, apple, egg whites, chia, and flax seeds cooked in, and then I topped with with some crunchy PB & flax and chia and a big spoonful for homemade cranberry sauce. It was such a treat to enjoy before diving into my Saturday morning. 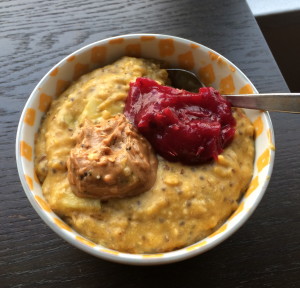 *Gorgeous weather on Friday. I took a nice walk on my lunch break. I also had a little spare time between my shift and the hospital and a meeting downtown, so I got to walk around the Union Square Farmers Market and stock up on plenty of gorgeous fall produce! 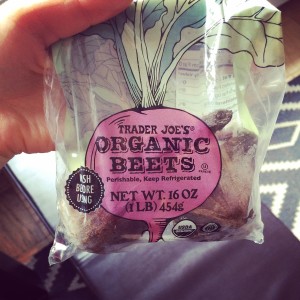 *I have a fun video project in the works and I can’t wait to share it with you guys.

* On Saturday, I avoided the news in favor of another yoga class and a day spent reading and cooking (and maybe binge-watching Gilmore Girls on Netflix—aka having it on in the background while I did stuff). I also made Chocolate Covered Katie’s Pumpkin Fudge Balls.

Today I’m participating in the Making Strides Against Breast Cancer walk with my mom, sister, and aunt. It’s a little bit of an emotional event, as my grandmother battled breast and ovarian cancer for many years before succumbing to the latter in 1999 at the way-too-young age of 61. Sometimes I wonder what things would be like if she were still alive—What kind of relationship would we have? How would I be different as a person if I’d had her influence in my life as a teenager and twenty-something woman? What would be the same?

As I’ve written before, my grandmother’s medical issues were such a central part of my life as a child that it would have taken a lot for me not to go into some sort of “helping” profession. Even though I’m far from perfect, I like to hope my efforts make a small, positive difference to someone.

What are you grateful for this week?

PS: Have you entered my Maple Hill Creamery yogurt giveaway yet?